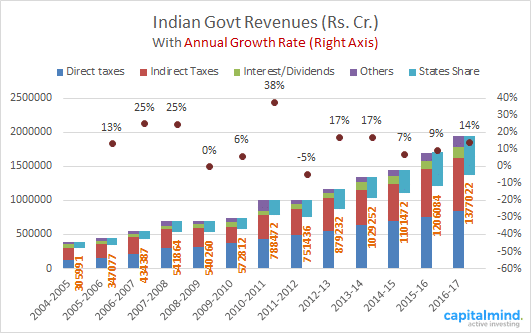 Budget 2015-16 was the first real budget by the government. Which missed many estimates and added many more things. But here are the elements to note in the FY17 budget.

What the government’s doing, at least on paper, is to bring the fiscal deficit down to 3.5% of GDP by increasing revenues and reducing expenditure.

Let’s look first at how the government expects to earn its money.

They will make Rs. 13.7 trillion (1 trillion = 1 lakh crore) this year, much higher than the 12.06 trillion they made in 2015-16. This translates to a growth rate of 14%, something we haven’t seen since 2013-14. This sound possible, but remember that then, inflation was a 8 to 9%, and inflation increases revenues easily. Now, inflation is at 5%, and getting 14% means you want to get a substantially higher chunk of revenues from someplace.

Overall, the lower price of crude and the massive  increase in crude taxes took the current year’s revenues up by 60,000 crores! We made 12 trillion where we expected to make only 11.4 trillion. In FY 16, crude taxes ensured that excise duties were up 50%!

This year, on the back of this massive bonanza, we see to expect a fairly large increase in taxes, but none of them alarming. Given low inflation and a slowing corporate economy, taxes from companies grew only 6% while they are supposed to grow 9% this year.

Personal taxes on the other hand will grow at 18%, which would make sense because they’ve taxed a lot more of income: from additional dividend taxes to higher surcharges. Plus, remember that we have a tax amnesty scheme that will bring in more money.

Indirect taxes are only expected to grow 10%. They all saw robust growth last year, with service tax going up 25% from the year before!

With low inflation continuing there needs to be real growth. The government continues to tax India more – both personal taxes and corporate taxes are up. Can we expect that corporate and personal taxes will grow so much in spite of higher taxation?

There are elements of revenue that you might contest, but are parts of the estimates. For instance, they expect the telecom spectrum licenses to produce Rs. 99,000 crores in revenues. They have regular revenues of about Rs. 57,000 crores, which means they expect about Rs. 40,000 crores more in FY17. This isn’t unachievable.

Expenditure goes up only 10.8%

The lower deficit number comes from a much lower expenditure number.

We are going to see a 10% increase in interest payments and that we cannot change.

Defense sees a 10% increase in expenditure, much of which is the One-Rank-One-Pension change introduced this year. However, it’s not apparent what’s happening with the pay-commission recommendations.

The subsidy bill actually goes down! From 257,000 crores it falls to 250,000 crores, largely because of a lower food subsidy bill, which is 1.34 trillion rupees (versus the 1.39 trillion we spent this year).

They’ll only spend Rs. 25,000 cr. On bank recapitalization. Which is less than otherwise required, but they are likely to add more if they should.

Roads get about 97,000 crores this year. With 55,000 crores coming from the central budget directly to NHAI, another 27,000 crores will be used to build rural road networks. This is huge and productive.

Plan expenditure is up 15%. Next year, finally, we won’t see a differentiation between “plan” and “non-plan” because the planning commission is gone. But this time we see the plan expenditure up mainly due to a higher allocation to roads, gram panchayats and irrigation.

How are we split? 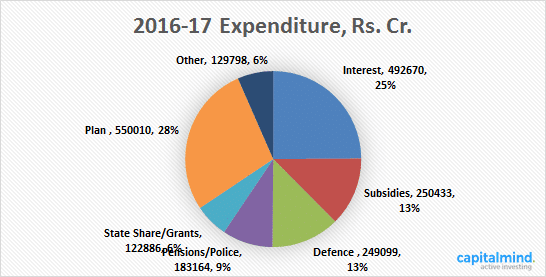 The deficit actually decreases in absolute terms to 5.34 trillion, but that’s a lower percentage of GDP (only 3.5%) which is estimated to be Rs. 150 lakh cr. 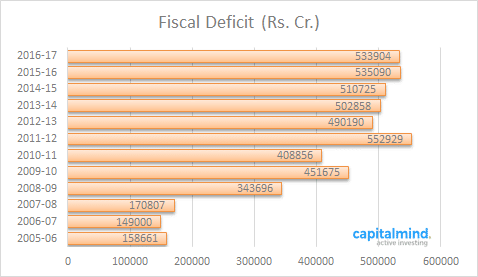 Last year, this didn’t work at all; the government saw the crude prices crash over 50% which saved them, but kept GDP growth at 8%. However, unless we see a major world crisis in FY17, a 10% to 11% GDP growth should be possible (5% inflation and about 5%-6% real growth)

Overall the revenue numbers look okay, only with the tax amnesty and higher tax percentages applying. However, the expenditure numbers look a little low in the light of a huge pay commission bill (which might not have been factored in) and potentially higher requirements for banks.

While the government will probably be able to make the deficit targets this year, it looks like they are squeezing out higher taxes from us and seeing their revenues grow much faster (14%) than the GDP (11%). And their expenditure is only at 10.4%, slower than the GDP growth expected. This is unsustainable, and will crimp growth – a number that is 3.5% of a GDP that grows 11% will not work if GDP only grows by 8%.

In some ways this is a “duct tape” budget – where many key elements are brought in only to make sure the budget deficit numbers work. The massive push for infrastructure is simply not there, other than in roads and railways.

But that also means we should stop expecting the government to do all the hard work in infra; much is required from private citizens in terms of investment and execution. Most of our large private companies have come up through crony capitalism, and that will only change if the big names are changed by new players coming in. This process is inherently destructive, and we will see a few bankruptcies (there’s even a bill for that!) that will drag down the GDP and government revenues.

This shouldn’t worry us. In fact I’d be happy if they miss their revenue estimates this way. It will really prove that the model – of bad cronies dying and their assets sold to newer private parties – is happening and the long term story is rosier.

The end view on the budget is:
it is better than we expected because we expected so much worse. But it’s a reminder that India is moving on from a budget-determined path of growth once a year, to a more dynamic path that is charted as the year proceeds.