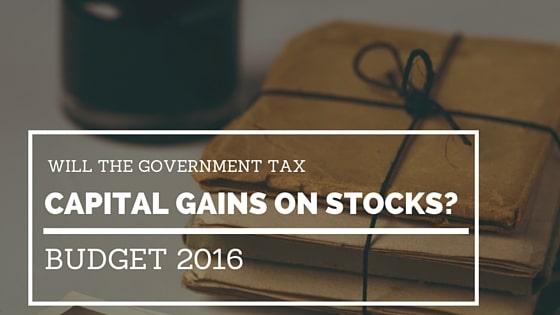 Much speculation exists that the government will change the nature of Long Term Capital Gains tax for equities – from zero to…something.

For the record, I would fully support a change in this regard, because I’m against any specific exemptions – they all skew the game in favour of something or the other at the cost of something else. I will explain, but let’s do a bit of a history thing.

Why Tax Capital Gains? And Why at a Lower Rate?

The government taxes income of any sort. If you earn money as a salary there’s tax on it and you don’t get to account for any expenses. If you put your savings into a bank deposit, the interest you earn is your next year’s income and you’re taxed on that too. If you get money from any source – gambling, lottery, horse races, consultancy, or from a business you run, you will pay tax on it. There are some exemptions like you don’t pay tax when you inherit something, currently, but there was a point that even that tax existed.

Since the government wants to tax you on all or any income, they want to tax you on income you earn when you buy and sell an asset at a profit. An asset is anything that can be bought and sold legally, to simplify it enormously. A house is an asset – so if you buy a house and sell at a higher price, the profit (“capital gain”) is taxable. This applies to houses, gold, mutual funds and so on.

But at the same time the government wants you to invest, and not just put your money in a safe fixed deposit. So they give you a slightly better deal for investing in risky assets (which is what “capital” assets are supposed to be). When you take that risk, the government doesn’t have to, and you create jobs; that’s the theory, at least.

So capital gains are taxed at a lower rate to encourage such risk taking. The current rate is 20% of such gains. And you also get something you don’t otherwise get – the benefit of inflation indexation. Meaning, if you buy a house at Rs. 100K and sell it for Rs. 200K ten years later, the original Rs. 100K would have been equal to today’s 200K if you assume about 6% inflation a year. That means you actually earned nothing – and the taxman recognizes that and allows you the benefit of inflation, by marking up your buy cost by the level of inflation each year.

In stocks, we have a different beast. In 2004, the finance minister, Chidambaram, made capital gains tax on stock market transactions go to ZERO. How? He introduced the Securities Transaction Tax (STT) and if you have paid such a tax, there is no tax on capital gains in that transaction. This was supposed to:

And by and large the second and third incentives have been met.

But Why Do We Need Unending Exemptions?

All exemptions need an end-date. Because when you exempt stock market transactions from long term cap gains taxes, you disincentivize a similar investment in, say, private unlisted companies. This makes no sense – if you create a large private company that’s sold to, say, Google or Reliance, you will pay 20% capital gains tax on the profit. But if you bought shares in a public company and sold them a year later you pay no tax?

The Mauritius guys pay no tax on the private company transaction either, so the “equal” thing is only for public markets.

And then, it would be strange to promote investing in equity over, say, investing in other asset classes; from warrants, to derivatives to even ESOPs, there are different rules that apply.

We need these exemptions to end because they were designed to promote equity investing. They probably have done their job.

What Is Being Suggested?

One suggestion is that long term capital gains tax only apply on investments that have been held for three years. This is a good starting point, and helps most investors. Anyhow, a house, gold, or other assets get three year holding periods before they are called “long term” assets – why should equity be any different?

But this might be less likely because a) STT is an easy tax to collect – it comes directly from the exchanges, b) STT applies to everyone including FIIs and mutual funds and c) the impact of a low STT is only felt by short term traders who are not really a large enough number for a popular measure.

Our View: Let’s Get Rid of Exemptions So We Can Lower Tax Rates

Our tax rates are at 30%+. Why? It’s not like the government earns 30% of GDP. Or even of all the salaries paid; it earns a fraction of that. One of the reasons is that there are so many ludicrous exemptions. From your housing loan interest, to your medical expenditure, to lower capital gains taxes and what not.

If we removed exemptions, the government could get an equivalent revenue by reducing the tax rate at the same time. I know we don’t trust our government to not take as much as it can, but honestly that’s how a government should be. If exemptions are lower, then tax collection pain is lower (you don’t need all those fancy calculations and tax-saving investment mechanisms and so many tax officials to oversee everything) and therefore the government spend on tax collection is much lesser.

FIIs too are like that. They are institutions by definition. They don’t pay Indian capital gains taxes, and sometimes they don’t pay taxes in their home countries (exactly like our mutual funds). But when their investors (who may be, say, US residents) take their money out by redemptions, they will pay taxes in their home states. Yes, there are still exemptions here for people who live in Dubai (no tax anyhow) but you get the point here. There is nothing big about an FII not paying tax, because even a DII doesn’t pay tax.

Lastly we fear that the market will tank if this tax is introduced. Well, if it were introduced stupidly, like saying it will only apply after April, then yes, I think March will see mas
sive selling so that the current tax regime can be used to the best end.

But if they are smart they will either:

b) or, they will allow you to mark all your investments as if they were bought on March 31 of 2016. So even if you bought at 10 and current price on 31 March 2016 is 100, your cost price is assumed to be 100. That will not trigger a sale, because you effectively do not have any capital gains at all until April.

Overall, I would welcome to removal of all exemptions (not just this one), and a lower-tax regime. Adding a long term capital gains tax in isolation isn’t going to help that much.  Instead of looking at this as a tax-gaining exercise – it will not yield much in terms of tax revenues – we should consider this as a mechanism to level the playing field.

We’ve written before that we should take away tax sops for housing. (There are five different ones!)

We recommended making equity gains tax free after three years for the last budget in 2015.

These steps may not be popular, but we believe they will help in the long term.