After reporting a Rs. 550 cr. loss in December, Jindal Steel and Power Limited has seen a downgrade in its bond rating by Crisil. They were moved from BBB+ to BB+ (a full letter down, which is three notches).

The downgrade reflects CRISIL’s belief that the JSPL group’s liquidity will deteriorate significantly in the near term as stake sale in rolling mill and the receipt of proceeds from settlement in Bolivia may take longer. CRISIL had earlier expected these to be completed before March 31, 2016; delays would adversely impact group’s debt-servicing ability in the near term and increase group’s reliance on timely refinancing of debt taken for Angul (Odisha) steel plant. Any delay in the said refinancing beyond CRISIL’s expectations of March 2016 could lead to severe pressure on cash flow and will hence remain a key monitorable.

Recent introduction of minimum import price for steel products by the Government of India will not provide immediate respite to the group’s liquidity. However, its impact on profitability over the medium term will remain contingent upon extent of improvement in domestic realisations. Performance of the power business will remain subdued due to absence of power purchase agreements and low demand in the merchant market.

The ratings continue to be on ‘Watch with Negative Implications’ as CRISIL believes due to a weak operating and financial performance, there will be a breach in covenants for part of the non-convertible debentures issues of JSPL, which can lead to a sharp deterioration in group’s liquidity and credit quality. Based on the discussion with the debenture trustees, CRISIL understands that the debenture holders have not exercised their option to ask for accelerated repayment. However, if the debenture holders choose to exercise the option for accelerated repayment, JSPL’s liquidity position could come under further pressure. CRISIL will remove the ratings from watch and take a final rating action once it has more clarity on this issue.

The main thing is: the covenant breach in NCDs of JPSL. If that happens, these bonds will have be downgraded to D! Which is another few notches further down, and will again impact bond holders.

Importantly, they say the company has short term liquidity issues – since the sales of their assets will not realize cash immediately, and they’ll have to refi their debt. With a downgrade, the fresh debt will cost them more and they aren’t investment grade bonds anymore. Plus, the minimum import price imposed by the government will not solve their cash needs – demand could still be very low.

These NCDs are held by partially by mutual funds, and the brilliant @NagpalManoj tweeted about the impact. 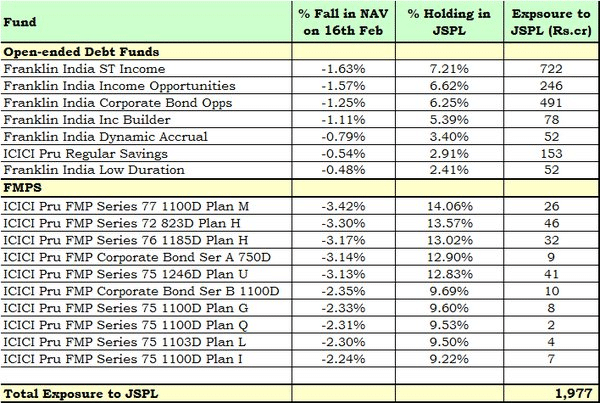 Franklin seems to have the largest exposure to the JSPL bonds, which have already hurt because of the downgrade. Why? Because these bonds are not traded regularly there is no “market price” to mark the bonds against. So the funds have to mark them to a “model” which is based on the ratings given by the rating agency (and other factors like time to maturity and so on).

If the rating goes down, the market value based on the model will go down. Three notch downgrades can cost a fair deal – evidenced by a drop of 1.6% in the Franklin ST Income fund which holds 7.2% of it assets in JSPL bonds.

Should you worry if you hold these funds? Well, firstly, check the portfolio of these funds. They can’t exit such bonds in a hurry but they will have other investments too. And if you feel that some of them aren’t exactly cutting it, you should move on. But the hit for the JSPL downgrade has already been taken, and only if we think that JSPL is going to default (they have more than 33,000 cr. in loans and bonds) should we consider exiting. In fact if JSPL defaults the best thing would be to exit all public sector banks as well.

JSPL does have an issue though. They were downgraded in September by ICRA and funds holding their bonds had to take a hit then also. And ICRA downgraded them again in January.

But we have to remember: Debt funds do have risk. The current time is going to demonstrate that.