A bungled merger. A corruption scandal. Three CEOs in a year. But hey, at least the snacks are free again. (Link)

Policymakers and commentators in India talk quite a lot about the need to channel long-term retail savings into financial instruments. They freely criticise the retail investor’s lack of a long-term ‘mindset’. ‘When retail investors can lock into property or gold for 15 to 20 years at a time, why can’t they do the same with bonds or equities?’ they ask.

But the explanation is quite simple. Small savers looking to park their long-term surpluses have hardly any suitable options left. (Link)

As launch customer Deutsche Lufthansa took delivery of its second Airbus A320neo, Airbus CEO Fabrice Brégier has reportedly told Air Transport World that IndiGo, India’s largest domestic carrier, and largest Indian operator of the A320 family aircraft will be the next operator of the new fuel-efficient plane. (Link) 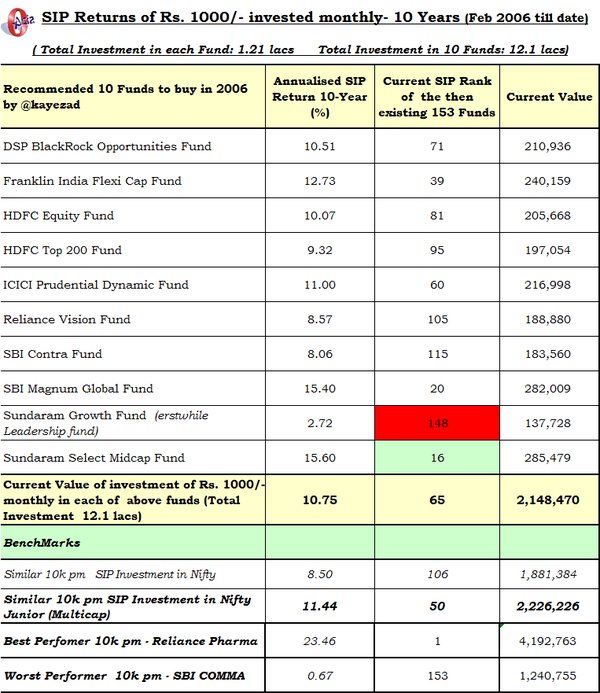 How much more could Sovereign Wealth Funds sell if oil goes to $20? According to JPM $145bn of government bonds, $113bn equities. 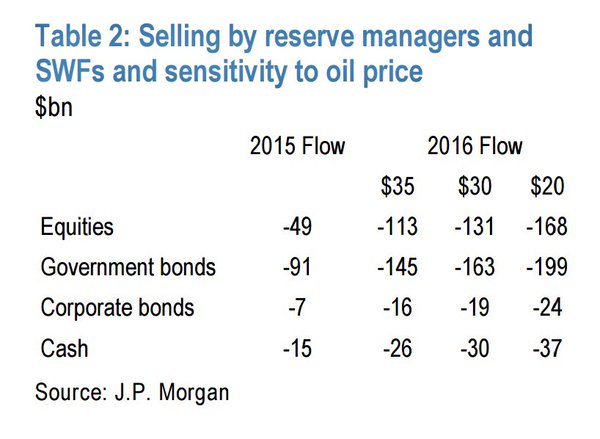 #general: The Agony of High Returns

Even with a time machine, a lot of people wouldn’t want to own the best-performing stocks.(Link)

#general: What is retention statement?

SEBI mandates that every broker shall once in a quarter, transfer any excess funds lying in the client’s trading account back to his bank account. What it means is that in case there are any unutilized funds in your trading account, the broker is compulsorily required to send these funds back to your bank account.

This was with the intention of ensuring that brokers don’t misuse client’s idle funds. (Link)

Reserve Bank of India (RBI) Governor Raghuram Rajan said on Monday he was not in favour of devaluing exchange rates to boost economic growth, signalling India will not join other countries such as China or Japan in pushing down their currencies.

“I personally feel sustained devaluation is neither feasible nor a good strategy,” Rajan said in a speech at a conference on medium scale enterprises in Thiruvananthapuram. “This (devaluation) is not the intent of RBI.” (Link)

The oil ministry is working on a policy for setting up a trading desk for oil marketing companies which will allow them to buy crude from the spot market as against the time consuming tendering process now, Minister Dharmendra Pradhan said. (Link)

India said it may seize Vodafone Group Plc’s assets in the country if the company doesn’t pay a disputed 142-billion-rupee ($2.1 billion) tax bill that’s still undergoing international arbitration proceedings, according to a copy of the notice that was sent to the company this month.

Anil Sant, deputy commissioner of income tax, informed the company’s Vodafone International Holdings BV Dutch unit of its dues in a letter dated Feb. 4, according to the document, a copy of which was seen by Bloomberg News. Spokesman Ben Padovan at Vodafone and a representative at India’s tax department declined to comment. (Link)

#general: Stretch Your Wireless Data Plan Instead of Paying More

Once considered a luxury product, a smartphone has grown to become a commodity over the years. But on Wednesday, things will reach a whole new level. As part of its attempt to connect every Indian, local smartphone manufacturer Ringing Bells ‘with immense support from’ the India government will launch an affordable smartphone called the Freedom 251 on Wednesday. The Freedom 251, touted as India’s cheapest smartphone -and likely the most affordable smartphone in the world as well – will sport a price tag below Rs. 500 (approximately $7). (Link)

The Centre is looking to rope in industry stalwarts such as Ratan Tata, NR Narayana Murthy, Deepak Parekh and Naina Lal Kidwai for its proposed Bank Board Bureau (BBB).

“This is a major step towards governance reforms in state-run banks and we want to ensure that credible and distinguis
hed industry leaders are on this platform,” said a government official aware of the deliberations. (Link)

#general: Zimbabwe Raises $1 Million From Sale of Elephants to China

Zimbabwe raised $1 million from the sale of elephants to China and will continue exporting to the Asian country as part of conservation efforts, wildlife authorities said.

“We exported 24 elephants last year to China and we know that only one died. The rest are still alive,” Edson Chidziya, director general of the Zimbabwe National Parks and Wildlife Authority told lawmakers in the capital, Harare on Monday. The proceeds were used toward conservation programs, he said. (Link)

#general-from the past: Zambians hold prayer for plummeting currency

The Zambian High Commission in Windhoek in association with the Association of Zambians in Namibia (AZANA) held a national day of prayer and fasting at the Roman Catholic Hospital Hall in Windhoek on Sunday.

At the event Zambia’s High Commissioner to Namibia Sylvia Bambala Chalikosa said there are a number of compounding factors which necessitated the call for national solemn reflection.(Link)

#general: Something’s rotten in India’s startup scene – and it’s time to call it out

A week after breaking even in six markets across the globe, online restaurant search, rating and food ordering company Zomato wants to stop charging commission from restaurants covered by it, co-founder Pankaj Chaddah told Business Standard. This would apply to orders generated from the platform as well as for providing last-mile delivery services. (Link)

#general: Will the Year of the Monkey bring cheer to the Sensex?

Whether the rally in the Indian markets will sustain or not depends to a large extent on the currency movement by China and the Indian govt’s ability to stick to the fiscal consolidation plan. (Link)

Exports have fallen in terms of value but not so much in terms of volume. Rather it’s the falling commodity prices of petroleum, iron, steel and the agricultural sectors which are the prime reason behind the fall. (Link)

Oil stockpiles at an 86-year high and warnings of a persistent glut weren’t enough to keep money managers from betting that prices are ready for a rebound.

Speculators’ long positions in West Texas Intermediate crude climbed to the highest since June as oil sank toward a 12-year low, according to U.S. Commodity Futures Trading Commission data. Despite a 12 percent rally Friday, WTI finished last week down 4.7 percent. Prices on Monday gained 1.3 percent to $29.82 a barrel at 11:46 a.m. in New York. (Link)

#macronomics: We will not hesitate to act: Draghi

“The ECB is ready to do its part,” Draghi said. (Link)

Ali al-Naimi, the most senior oil official of the world’s biggest crude exporter, will speak with Russia’s Alexander Novak in the Qatari capital, according to the person, who asked not to be identified because the talks are private. The person didn’t say what the agenda of the meeting will be, which will also be attended by the kingdom’s fellow OPEC member Venezuela. The energy ministries of Russia and Saudi Arabia declined to comment. (Link)

#stocks-from the past: Sterlite to Set Up LCD Panel Plant in India; Invest Rs. 40,000 Crores

Billionaire Anil Agarwal-led Sterlite Technologies on Wednesday announced an investment of Rs. 40,000 crores to set up a LCD panel manufacturing plant in the country, generating about 50,000 jobs.

The company, which makes optical fibres used in high speed Internet services, is also working on a project to connect defence establishments through optical fibres in Jammu & Kashmir (J&K). (Link)

China’s central bank governor Zhou Xiaochuan said in an interview at the weekend there is no basis for continued yuan depreciation. In an wide-ranging interview with financial magazine Caixin, Zhou spoke during a week-long holiday in China with markets shut, warning the PBOC won’t allow speculators to dominate market sentiment, and downplayed concerns over the sharp decline in the country’s foreign-exchange reserves over the past few months. (Link)

#general-from the past: Amazon begins a new chapter with opening of first physical bookstore

The Sensex is the worst performer among global indices today. (Oil rally?) 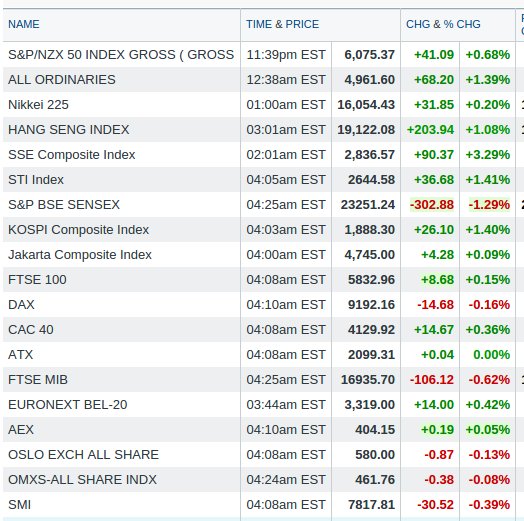 How can I find stocks that are undervalued? – Link

Short Straddles and their defence – Link

Superforecasting: The Art and Science of Prediction – Link

The Signal and the Noise: The Art and Science of Prediction – Link