Morgan Stanley’s Institutional Fund Trust (MPEGX) has been an investor in Flipkart since 4 October 2013. Every six months, they reveal their holding with the current valuation of Flipkart as they see it. To the deepest consternation of the Indian twitterati, and to the schadenfreude of some (look ma,long words!), Flipkart has seen its valuation chopped down by 27% in the December 2015 quarter. 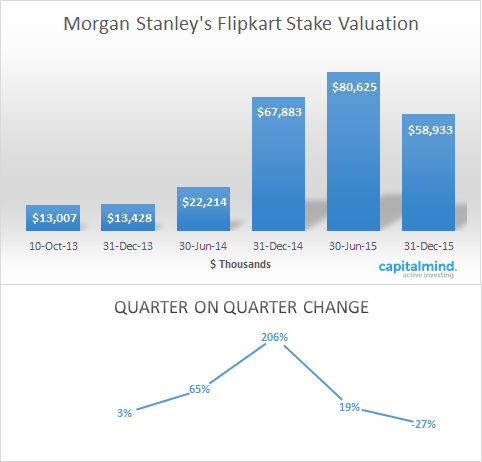 The lower valuation is probably a combination of internal assessment of market valuations by the MS team, which has also similarly dropped valuations of Palantir and Dropbox, other “unicorn” startups, and of recent other transactions that might have occurred.

Closer home in India, Info Edge took a big cut in the valuation of Canvera last quarter, where it owns 49%. It also has, in the past, brought more clarity to its holdings of Zomato. In the Sep quarter, when asked about when they could monetize their stake, they said:

Look, I think Zomato has now sort of shifted gear and has moved into focusing more on revenue growth and possible breakeven sometime in the foreseeable future and it would probably be expensive for us to hang on in there, it is not as if we are getting offers in any case, so therefore we do not expect much movement on that space for a while.

The fear, of course, is that these startup valuations could go to zero. It’s unlikely, but not unprecedented. And we should expect at least one of the big startups, even in India, to shut down. Flipkart, however, might not be going down that route just yet. Even at the 27% lower figure, it’s valued at $11 billion more than zero. All is not well, but the fat lady hasn’t sung either. (Sorry. I promise to not become the Sidhu of startups)

Startup investors have always been illiquid, so they can always mark their investment to what they like. Startups are likely to see down rounds, and rough markdowns; if they were listed, they would have been destroyed by the market anyhow. It’s just another bear market – and it only scares someone who’s never seen one before.