Today Vidya Krishnan of the Hindu decided to write a story. This was a story that apparently caused some random panic among stocks of the pharma variety because OMG THE US GOVERNMENT HAS BANNED INDIAN API IMPORTS!

In a move that will further inflate prices of drugs in the United States — already a burning issue in the current presidential campaign — the U.S. government has made it mandatory for Active Pharmaceutical Ingredients (APIs) to be manufactured locally. At present, nearly 80 per cent of drug raw material requirement is met by India or China.

You see why the market has panicked on seeing such a headline? My goodness if all API imports are banned, then that’s pretty much where all Indian pharma companies will die. Vidya Krishnan later defended this article saying it was only about US Government Procurement of drugs, which is a much smaller market, and that it was still a story because hey Nirmala Sitharaman (India’s commerce minister) was ready to take this to a bilateral talk. 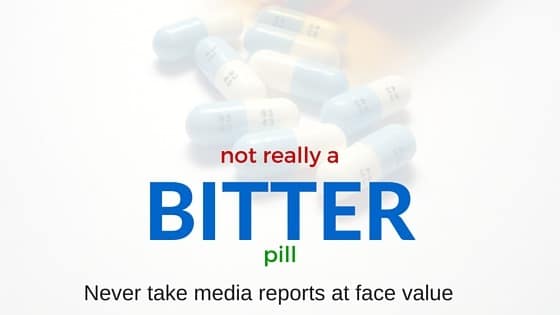 Way down below, in an obscure part before the ending, she says:

It is worth noting that Indian companies are not allowed to quote for government contracts in the U.S. since India is not a signatory to the WTO’s government procurement agreement. But this change will affect companies which have subsidiaries in the U.S. that procure APIs from their Indian counterparts and make the finished product in the U.S.

So it’s apparent to us market players at least that the upper paragraph and headline was clearly rumour-mongering, and caused more damage than it should have. From now on, let’s do ourselves a favour and treat such articles – from Ms. Krishnan and perhaps the Hindu – with less seriousness.

Is There A Story?

Now there is a small story, but it could have been worded better. The concept is:

Let’s see the ruling: (This was November 5, 2015, so nothing happened recently either)

In HQ H233356 dated December 26, 2012, mefenamic acid imported from India was blended with excipients and packaged into dosage form in the United States. Based on prior rulings, we found that the specific processing consisting of blending the active ingredients with inactive ingredients in a tumbler and then encapsulating and packaging the product did not substantially transform the mefenamic acid because its chemical character remained the same. As such, we found that the country of origin of the Ponstel (mefenamic acid) capsules was India, where the mefanamic acid was manufactured.

In this case, the processing performed in the U.S. does not result in a change in the medicinal use of the finished product and the active ingredient. The Acyclovir retains its chemical and physical properties and is merely put into a dosage form and is packaged for sale. The active ingredient does not undergo a change in name, character or use. Therefore, in accordance with our prior rulings, we find that no substantial transformation occurs in U.S., and for purposes of government procurement, the Acyclovir tablets would be considered a product where the active ingredient was produced, which would be China and India.

The story is not such a big story – firstly, it’s well known the US government doesn’t procure from Indian companies and secondly, they have done this earlier: called only API wrappers (where the API is sourced from India or China) as non-domestic and therefore inapplicable for govt procurement. There’s no “news” in this, at this moment.

However, this may be something we could protest – as the US does often when we deny their companies certain access etc. – and that’s fair.

A good point made by Surajit Pal of Prabhudas Lilladher (see video) was that this will increase the cost of Medicare and Medicaid in the US. And they doubt the extent of implication in the article; obviously it was only exaggerating the impact of what was done.

The MD Of Biocon also sounded really unhappy, but she obviously was told that the news was that ALL APIs would be banned by the US, which again is nonsense.

Vidya Krishnan reacted with a five tweet series about why she was right. As a journalist, she’s fine. As a person who writes English professionally to convey a clear and precise message, she is not. This was not clearly about government procurement (that should have been in the opening paragraph) and did not clearly state that such incidents have happened in the past too, and that the “Buy American” have kept Indian based APIs out for ages. In regular times, we’d ignore something like this – but this made a lot of people really really antsy, and was probably one of the reasons pharma companies tanked today.

Our View: What Else? Question everything.