The Economic Survey 2016 is out and it states very interesting points. (Note: All bold points are my doing, not the survey’s)

There’s more than 400,000 cr. stuck in the debt recovery tribunals in 2014-15 and the pending number is just increasing year on year. 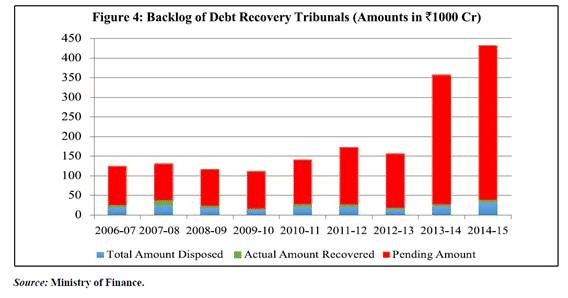 There needs to be a bankruptcy law, argues the Survey, but we also need to be a way to empower the bureaucrats that run institutions so they can resolve problems faster.

Only 5.5% of earning individuals pay tax!

The Eco Survey says there has been too much exemptions and we should either maintain thresholds or cut them. And reduce tax rates. And that we should tax agriculture and Real Estate too:

Laying out the fiscal capacity roadmap for the 21st Century, the Survey calls for widening of the individual tax payers’ base. Despite the number of tax returns filed picking up from mid-1980 onwards, nearly 85 percent of the economy remains outside the tax net.  Pointing out that  just 5.5 percent  of earning individuals are in the tax net, translating to a ratio of about 4 percent of tax payers to voters, the Survey says this ratio should be raised to a desirable estimate of about 23 percent. It says that tax paying and political participation are the two important accountability mechanisms  wielded by citizens. This difference in taxpaying and voting results in contrasting phenomena such as the Indian state being able to avert famines while chronic malnutrition remains a challenge, organizing mega events but routine safety for women being more difficult to achieve, and effective state response to floods and tsunami while water and power metering remain more challenging.

As a steps towards building fiscal capacity, the Survey suggests that the easiest way to widen the tax base would be not to raise exemption thresholds.  Making a study of the data since Independence, the document points out that the exemption thresholds have been raised much more rapidly than underlying income growth resulting in a widening of the wedge between average income and threshold limit. Bringing more and more people into the tax net via some form of direct taxation will help in realizing the promise of Indian democracy, it notes.

The  Economic Survey also calls for a review and phasing out of the tax exemption Raj that benefited the richer private sector. The Survey recalls the promise to bring down Corporate Taxes from 30 percent to 25 percent while proposing the phasing out of exemptions in an orderly manner.  It also calls for reasonable taxation of the better-off individuals regardless of where their income comes from, – Industry, Services, Real Estate  or Agriculture.

Economic Survey 2015-16 states that India has the second highest number of undernourished people at 194.6 million person (FAO, State of Food Insecurity in the World, 2015) which warrants immediate attention. Moreover, with 27 per cent of the population below the poverty line, the rise in prices of food impacts the poor adversely, with a greater proportion of their household incomes being spent on food. Therefore, along with provision of food subsidy, stability in agricultural commodity prices is essential for making poorer sections food secure.

It’s not that difficult, in our times, to recognize when supply is going to fall. I was on TV last year – Feb 27, so almost exactly a year back – saying:

The big problem is in pulses. Pulses production was down 10 percent in the summer crop last year, so that means there is low production; there is a 10 percent increase in freight cost for pulses, so that automatically creates a potential for inflation in pulses and this is potentially bad because this is going to affect inflation at least visible inflation from the point of view of the common man in a way. This can affect us about two-three months down the line and that is one of the big concerns.

We all know what happened with pulses after that! Prices went berserk and the “dal” went up to 180 rs. per kg. It was predictable for the previous year. This year, the issue is less of a problem – but pulse prices will probably fall to massive lows due to overproduction.