Let’s start with the obvious question: What are ‘Delivery Volumes‘ and ‘Traded Volumes‘?

Every stock that is listed on the exchange, will have 2 indicators based on volumes: The Total Traded Volumes (TTV), and the Delivery Traded Volumes (DTV). While TTV refers to the actual interest in the stock for that day, DTV refers to those trades that were not meant for intra-day, i.e. it actually leads to the investor taking ‘delivery’ of the stock into his/her DEMAT account. Stocks are traded every day and most stocks see intra-day trading (buy and sell on the same day). Intra-day trades don’t result in delivery – if two people buy and sell from each other and square off within the day, there will be volume, but no actual shares will change hands.

Can anything be gleaned from this? Well, one can definitely get a few pointers from these metrics; whether or not they are indicators or trends or price movements, is up for debate.

But: One thing is for sure. When there is a strong up-move (or down-move) in a stock, and the delivery percentage is high, it means that more investors have traded shares with a longer-term view, rather a non-intraday move. So the upmove/downmove could be a much stronger indicator of the strength of the move, if the Delivery %ages are high. Conversely, if you see prices rising without a corresponding increase in the deliverable quantity, it could mean that the move is questionable.

Again, the operative word being ’could’.

There are a few interesting trading strategies that revolve around this concept, and you can find them all over the Internet.

So we could quantify the theory as “Stocks which rise fast, and see a drop in delivery percentages, are a pattern that signify that a lot of trading is taking place in a stock, and that the rise is not sustainable”.

Every day as part of our Capsule product, we release a list of stocks which have seen massive increases in the “deliverable quantity to traded quantity %”. The Capsule product also comes with a list of all the Bulk and Block Deals of note that had occurred in a given trading day.

We have taken all the NSE-listed stocks as of Jan 29th (the last trading day of the month) and did a quick analysis on the following metrics:

– Price Change over the 20 trading days of January;

– Delivery Volumes over the 20 days, as a %age of Total Traded Volumes.

We then segregated them based on their market cap as Large Caps, Mid Caps and Small Caps.

The Top and Bottom 10 Large-Caps: 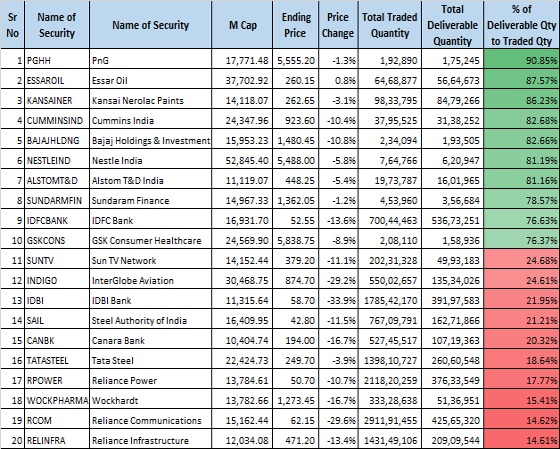 What is fascinating to note here, is that only one of these 20 stocks saw their price rise; and it was Essar Oil, a stock that is soon to be de-listed.

Towards the end of the table (the items in red) are the ones that throw up some interesting numbers; they have lost a tremendous amount in Market Cap. These are the stocks with the lowest Delivery %age for the month of January.

The Top and Bottom 10 Mid-Caps: 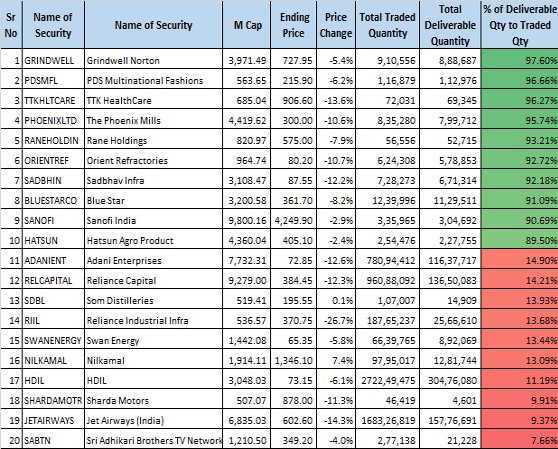 Again, barring the one stock (Nilkamal), the rest of the shares have declined in January. The markets haven’t been kind on anyone, it would seem.

The Top and Bottom 10 Small-Caps: 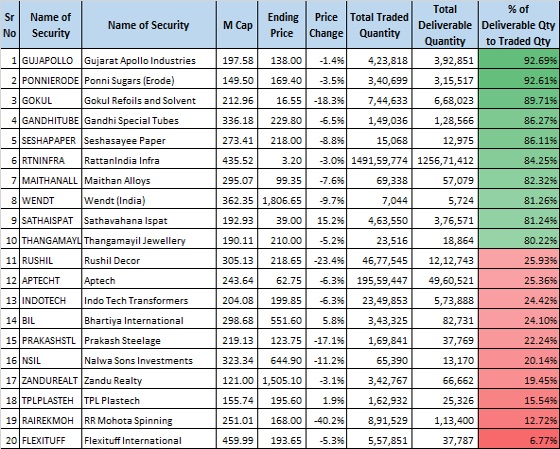 And finally, our Top and Bottom 10 in the Small Cap stocks.

And there we have it; the Top and Bottom 10 Large Cap, Mid Cap and Small Cap stocks based on their Delivery percentages. This will be a regular monthly feature at Capital Mind. Do let us know your thoughts!