Q3 Results are out! All the listed companies have announced their December 2015 Results. Analysts, industry watchers and economists alike have been waiting with bated breath for news of the reported Results to pour in? Were they disappointed? Or would we finally hear some long-awaited good news? 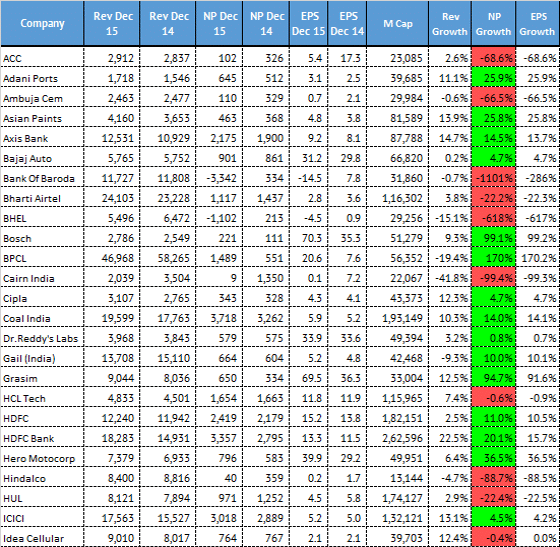 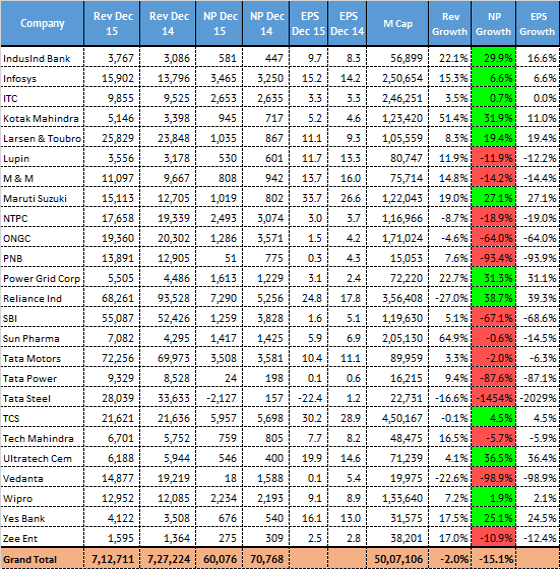 The last couple of weeks have witnesses some of the most astounding Results reporting by our country’s largest companies. The Nifty 50 reported some of the worst Results that come to mind.

If you thought that the previous 2 quarters were bad (Q1 – Flat profits; Q2 – Profits down 2.29%), Q3 has stretched the word ‘disappointing’ to a whole new depth.

Let’s start with the good ones; 27 out of the 50 actually reported increases in Net Profits y-on-y:

Some of the biggest culprits of the Q3 Earnings season are:

Since these are consolidated results, this will effectively mean that Nifty Profits – on a consolidated basis – are down 15% year on year. On a standalone basis the Nifty earnings are only down 3%, which means much of the muck is in subsidiaries or such.

Our View: The first question one tends to ask is: Have earnings bottomed out? The answer to that is: We don’t know. How do you know earnings are not going to be lower, when earnings have in fact been going down the last three quarters?

Take the banks – they tell us the worst is over. Think about it – they always tell us that. The only person saying that there will be more is: SBI. When banks tell you the worst is over, the worst could actually be ahead. They’ve been saying crazy things the last few years, and finally the skeletons are coming out of the closet.

The IT Companies – the exporters have abysmal profit growth. Why are we paying them such premiums?

The power and oil companies – many of whom have been hurt by the fall in crude. There is no rocket science in what they do, and they are pure commodity plays. We could disregard them but they are the biggest players in the index!

Vedanta and Tata Steel were scary, and so were ACC and Ambuja, even Airtel. This isn’t a one-timer, really.

Earnings have not bottomed, in our opinion, and we think for that to happen, you want one quarter that’s better than the previous one. Sure, it doesn’t help that we can never predict the exact bottom before it happens, but we’d rather react than predict.