To understand the scale at which China has dominated the steel business, here’s a recent comparison of their steel production with the next 10 countries on the list: (source: http://worldsteel.org )

China makes more steel than the next 10 countries, combined: 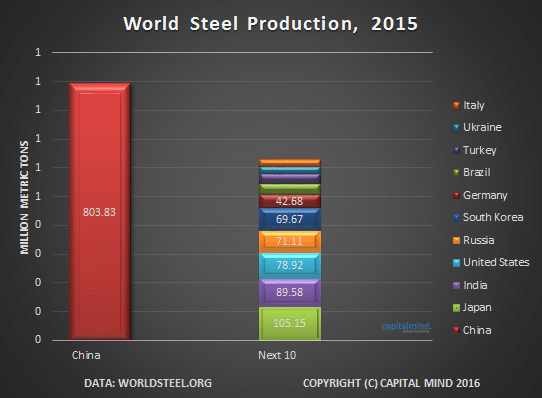 Why are steel prices low?

It started in 2014, in October, during the Crude price crash. The ruble fell to half its value (went to 80 to the Dollar, from 40) and Russia is a big steel producer (70 million tons). They cut the prices by half!

China had to follow, because Chinese local domestic use has crashed due to the slowdown. With production of 803 million tons in 2015 that is 8x the second highest player (Japan) and more than the next 10 countries combined, which manufactured just 566 million tons.

But What About The Rest of the World?

The WorldSteel.org report has 63 countries, and makes up for 98% of the steel production in the world.

China on one side, and the remaining 62 on the other. Look how they stack up: 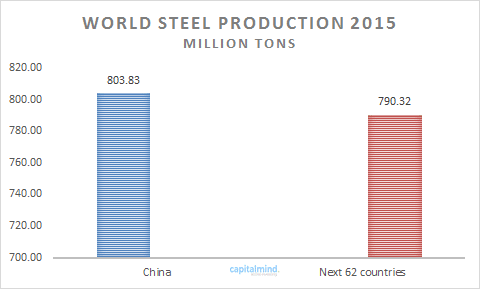 And please note: this is just production. China’s capacity is 1200 million tons; they have 50% more capacity than they produce!

The Chinese Production Cuts in Perspective

This capacity cut will result in China’s capacity of 250 to 300 million tons of steel more capacity than they currently produce, which in turn is greater tonnage than the rest of the world combined.

Next time someone tells you the Chinese capacity cut (over the next five years) may help you, I hope this graph comes in handy.

Indian steel companies are in deep doo-doo. We don’t cut prices to compete, and we are huge in the market, the third largest producer. It might just be better for us to shut shop if we can’t compete.