India’s GDP for the December 2015 quarter grew by 7.3% on what seems to be love and fresh air, because nothing else seems to be able to corroborate this kind of data. But it’s there and that’s what we have so at Capital Mind we’ll do our graphs.

Real GDP Grows at 7.3% while Nominal Growth Jumps to 9%, We Don’t Know How

Apparently the Real GDP (net of inflation) is growing at 7.3%. Which sounds great except it’s not really apparent where that’s coming from. The nominal growth – which had dipped below the real growth number last quarter has been noted at 9.23% which is quite phenomenal if consider how slow the economy has seemed. Inflation = the GDP Deflator back to Positive Territory, Highest in a Year

The ratio between real and nominal gives us inflation through what is called the GDP deflator. That is at +1.9% and at the highest level since December 2014. 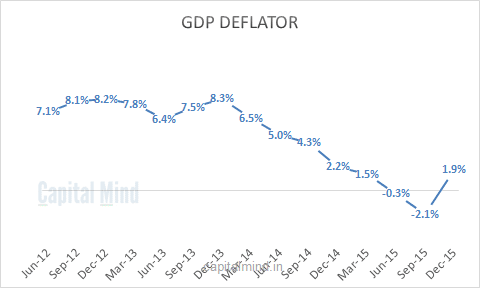 This is not a worry and actually sounds like it makes sense, since the drop in fuel prices which drove the GDP deflator into negative territory in Sep 2015 had been fully factored in by December 2015 (meaning: a year ago, that’s in the Sep to Dec 2014 period, oil prices had crashed, so the December quarter will have inflation that’s more normal)

Real growth in the agri sector was -1%, reversing much of the move in the previous two quarters.

Manufacturing did very well,, with a 12% growth YoY. Nothing else looked great. 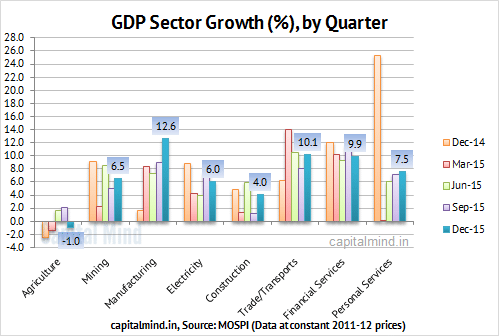 Looking at this data from a component perspective the lull in government spending continues, with growth there at sub 5% levels. Private consumption too didn’t do a big deal at 6% growth. The Trade Deficit fell – after imports fell a lot more than exports. 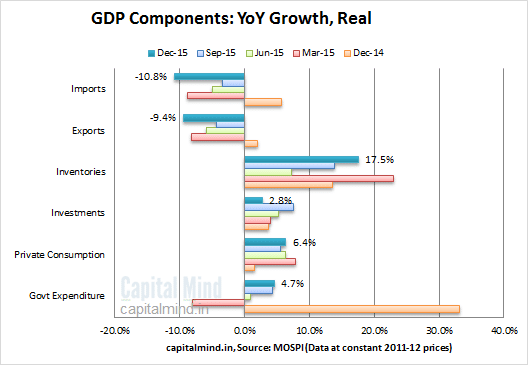 Our View: Not Really Trustworthy

This GDP data isn’t looking kosher. While they seem to have go their house in order in terms of CPI data, this piece of GDP data isn’t all that great. Global markets have been horrible, others the market would have taken such news better, but obviously no other market participant trusts this info either.

The problem is going to be what happens going forward; with the government restricting steel imports through duties and increasing excise duty on fuels. the drivers for GDP will come from somewhere other than private consumption (which has driven GDP for a long time). Looking at sectors, the space occupied by financial or personal services is shrinking with Trade and Manufacturing taking their place this time, but will they do the trick going forward? 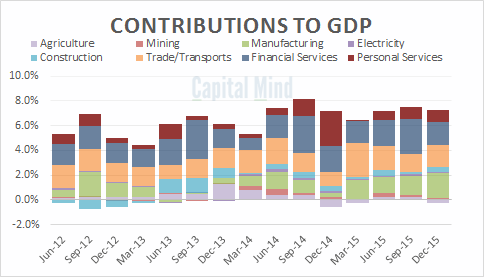 At a macro level the GDP numbers don’t seem like a 7% number, but let’s look at a turn in other numbers (Bank credit growth, industrial recovery and a recovery in wages) for comfort.

Note however: So many numbers of the past have been revised downward that it’s almost nonsensical to believe the current numbers.