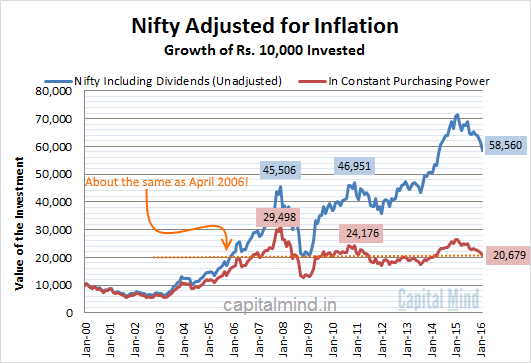 Stocks are great for long term investment but the returns should beat inflation. Inflation is essentially a drop in purchasing power – so what you buy in 2007 for Rs. 100 will cost you Rs. 200 today at an average of 8% inflation each year. So your stocks need to be going up by at least 2x since 2007, which is just about meeting inflation. Anything more than that is your “real” return.

We take the Nifty – and to be fair, we add the impact of dividends (the concept is: when you get dividends you reinvest it back into the Nifty) – and then use the CPI (Consumer Price Index) to “deflate” it to have a constant purchasing power back to 1999.

This tells us how much the Nifty has returned, net of inflation.

This almost means a lost decade, mostly due to high inflation. You can see the unadjusted number is much higher – so inflation has lifted your stock values, but in real terms has given you very little.