The market crashed big time today. But it was only big in the context of recent history: this is really the biggest fall since the August one day fall. But it’s reached an important point – it’s covered a “gap” that we had seen open for a long time. The good news is: this gap could help act as a support level – for those that missed out buying then, this is one more opportunity. What’s also happened is the crazy outperformance by the small and midcaps – noticed especially since the 2015 September bottom – has now officially vanished. We’re on par. 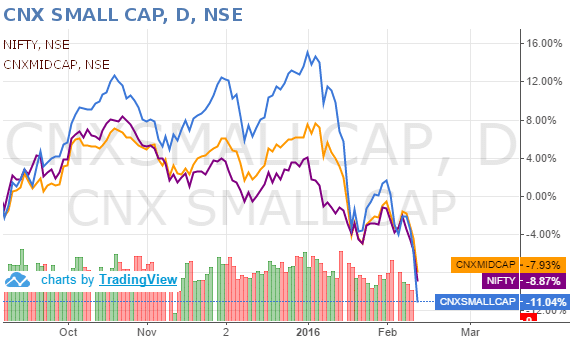 What Happens From Here?

First, let’s admit that India is not the great story that we keep hearing about. It’s going to hurt when the world hurts, and the world is hurting. But it’s not just the world.

It’s us. The problems we have aren’t small, and aren’t going to go away. This is a country that has not dealt with falling prices (assets or otherwise) anytime in the last 10-15 years. The fact that world steel prices have crashed makes us non-competitive not just in our exports but also locally. The solution to put duties will just make things more expensive for India and no one will want to invest and put plants here instead of at a country where imports are cheaper. We just don’t know how to deal with inflation and that is evident in our lack of interest in letting companies die.

The banking system is another issue that’s related. Because we didn’t let companies die, they sit as “stressed” assets on bank books – as restructured loans, as loans that have been evergreened or as full fledged NPAs. The fact that the banks should be trying much harder to liquidate the loans, collect the assets they have as collateral and write off the rest is simply not being done. Because of that we have a zombie banking system that is so burdened with these bad loans that they can’t lend to the newer, fresher, better companies that will likely even buy the assets of the dying ones.

Our government has gone silent and no one knows what kind of budget this will be. They have to maintain 3.5% fiscal deficit but also have a 100,000 cr. bill for higher wages, an equivalent cost of the food subsidy, a 50,000 cr. cost of the bank recapitalization (since the government owns 70% of the banking system) and then more for other expenditure like Railways and Defence. This is not going to happen without higher revenues, and revenues are slow now because of the overall slowdown. They will have to raise taxes or find other ways to gather money, and while I hope they realize how important it is to stoke consumption, my strong feeling is they will leave lesser in your pocket after the budget.

If the expectations from the budget are weak, and there is no sign of GST, we end up in a situation where the government can’t push the economy, the private sector can’t push it either and there’s no foreign investment coming in to offset this. This is not a good sign.

Having said that, things are starting to get optimistic; we are seeing a small revival in credit growth and there is activity in SME lending. If the world markets stabilize (they could do so if the current crisis is kicked down the road further) we might see a resurgence of flows back to India. If the government keeps taxes at bay, we might see a resumption of local consumption. If we can see the lower inflation make for more profits – of both households and companies – then the private economy will carry us forward. While that might still take time to realize, it’s important to look for such “green shoots” in times of turbulence.

Oh, I don’t have targets for the Nifty; the only thing we do is to keep strict stops, and look for more opportunities. The best thing right now, for:

The most important thing is to not panic. If a position keeps you awake at night, sell till you can sleep. There will always be another day.