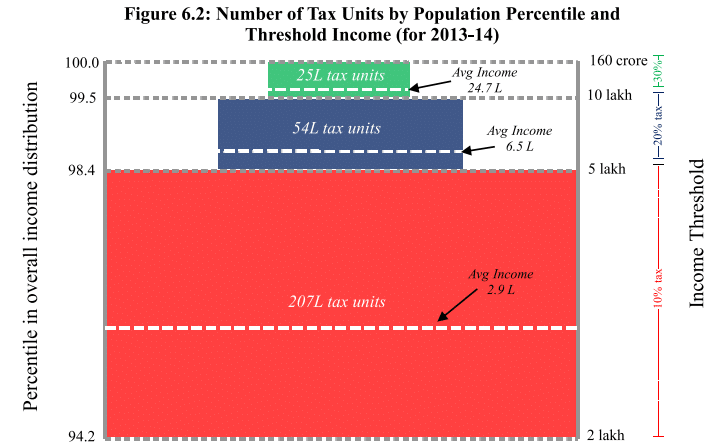 As the budget rolls in, there are a few things we think would be cool if they came through. Not all of the following are likely or even part of the government thinking, but it’s what we would like for the future.

In the economic survey we have a very interesting graphic. 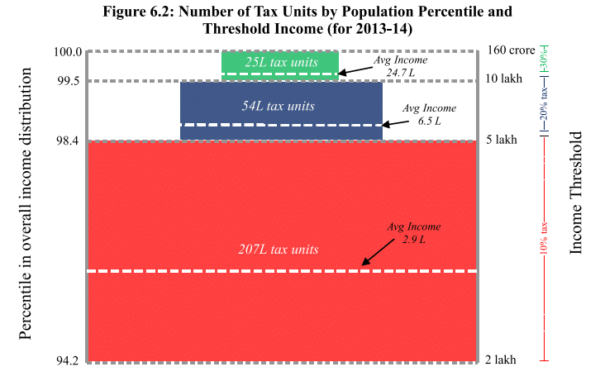 What can we see here:

At the lowest slab, the taxation is as follows:

Since the majority of taxpayers are in this bracket – 72% of them – and there is a cost to filing/collecting taxes, the government can do something radical: Completely eliminate income tax below Rs. 500,000

Remember, there are 2.07 crore people that make less than 5 lakh rupees per annum.

For 1 crore such people, tax collections are a maximum of  Rs. 15,000 crore, as the tax collected from “over average” people earning less than 5 lakh.

This is however simplistic: we will also find that removing the first 500K will impact all taxpayers having an income of MORE than Rs. 500,000 also.

Add them all up – if the government removed all taxpayers paying less than Rs. 500,000 from paying any tax, the government would lose Rs. 37,000 cr. in tax collections.

Let’s Make It Up: Remove all 80C exemptions

Section 80C allows you to “deduct” certain kinds of expenses or investments from your taxable income. This currently includes a lot of things – your children’s education fees, your housing loan principal, investments in insurance policies or in equity taxsaver funds, PPF etc. All of them, put together, are limited to Rs. 150,000 per year.

Since the government will have increased the lowest slab from 250K to 500K, essentially another 250,000 of income is totally exempt,

If the government completely eliminated 80C exemptions (which are limited to 150K anyhow) this is still a big positive for every tax payer.

That means the government will not see that loss if 80C is totally removed!

Update: Thanks to what reader Pras said, even this can be removed. Consider that taxpayers making more than 10 lakh rupees now suffer – they pay Rs. 25K less tax (due to no 10% slab between 250K to 500K) but they lose all the 150K benefit of the 80C, which would have saved them 50K of tax. So they net pay Rs. 25K more in taxes!

And There Are Other Gains

There are huge gains made by lower collection costs:

These two alone can result in lesser costs that will reduce that net impact by half. And then you have that many happy taxpayers for whom the net impact is positive!

Some of us will hate it

Of course removal of exemptions is hated by people. How will we encourage equity investments? Why tax insurance investments? etc.

My principle is that if you have lower exemptions and a lower tax rate – which is what I propose – we will significantly reduce the bullshit around tax that we have to be doing. It will hurt CAs and accountants but will in effect allow them to serve more people rather than dealing with the complexities of a few.

The Summary: What Are We Saying?

This will probably have a very low impact on tax collections (less than 7,000 cr. ) and save tremendous costs in collection and scrutiny.