Subsidies are usurped by the rich, and it goes to say that much of the benefits that subsidies are supposed to provide, happen to be used largely by the rich too.

Here’s a graphic in the eco-survey about the kind of subsidy that’s been provided to people who don’t really deserve a subsidy: 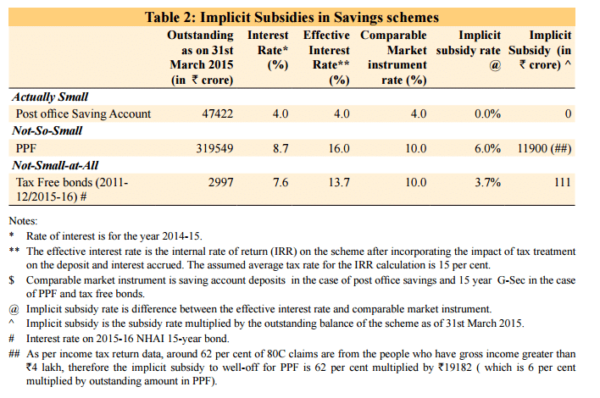 Look at PPF – the effective interest rate if you assumed both principal and interest were taxed, is 16%, which is a 6% subsidy. On the total amount, that’s about 19,182 cr. but we take only 62% of this figure, as about 62% of people who file 80C claims are people earning more than 4 lakh per year.

This is a little shady because the really poor won’t even file tax returns, and they may still have a PPF account.

The only solution, of course, is to make PPF taxable in some way or the other, I supposed. Taxed at exit through an EET regime would probably be one way to go.

Effective Subsidies to the Rich More than 100,000 crores!

A trillion rupees – 100,000 crores – of what subsidies are meant for the poor are used by the rich, apparently. 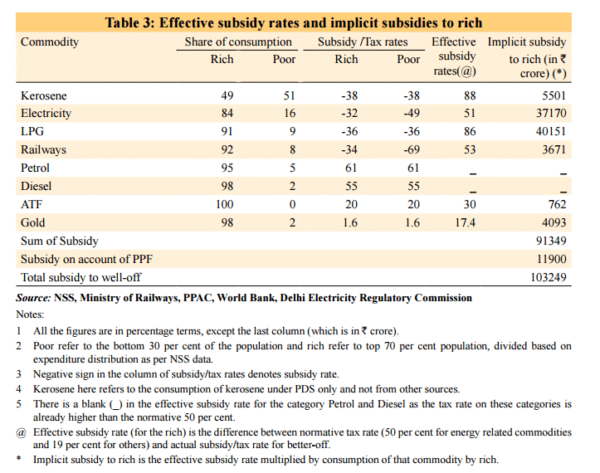 Gold here is basically considered as a lower taxed item at compared to a 26% tax on other goods. Railways subsidy uses the ratio of unreserved (poor) to all other reserved classes (rich). ATF taxes of 20% are lower than the taxes on petrol/diesel, and it’s effectively a “rich” subsidy.

These are all a little shady, in my opinion, in the sense that the reason you don’t tax gold is because it’s an investment, not a product. Or the Railways or ATF which is not a big deal in the larger scheme of things, with the railways actually charging higher for A/C levels than costs.

Electricity subsidy is based just on two states – Delhi and Tamil Nadu – where they assume lower consumption patterns for the poor. This also makes no sense because the lower consumption invites lower bills; at best this figure includes the lower slabs for the higher end consumers. They have extrapolated this for the whole country but I don’t think you should ever use Delhi data to represent anything beyond the borders of that city.

LPG and Kerosene are fair arguments.

Overall, this shows you the level of subsidy that exists. If you removed this subsidy – or somehow changed it so that your PAN number would be used to check if you have paid tax on income> 4 lakh and then removed you from the subsidy – then patterns of usage will change dramatically. And that would not result in anywhere close to this number.

For example if you said I had to pay full electricity price right from the first unit, I would reduce my electricity usage. If you taxed gold at 26% India wouldn’t see official gold usage at any level compared to current. And so on.

But the tone of this argument seems to suggest that the government might be in favour of:

Let’s see how the budget works on Monday.