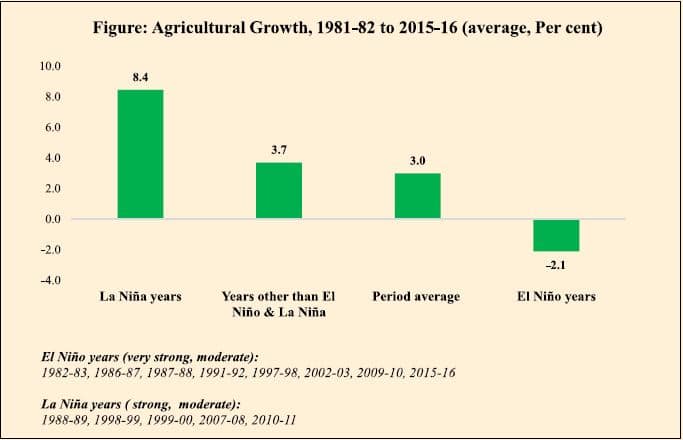 In what might be heartwarming news, the exit of an El Nino and a potential La Nina situation may augur well for Indian farmers, and for overall water supply at a time when reservoir levels are low.

What is El Niño?

Agricultural production in India is affected by El Niño, an abnormal warming of the Pacific waters near Ecuador and Peru, which disturbs weather patterns around the world.

An abnormal cooling indicates a La Nina, which is quite beneficial for India in that it helps provide the basis for ample rainfall during the south west monsoon.

The current El Niño started around February 2015; most climate models predict a return to “neutral” conditions not before May 2016.

There is a La Nina developing but there is no guarantee it will happen. And even if it does develop by summer , it could take six months to provide a positive impact. (the 2015 El Nino started in Feb 2015, but affected us only after August)

An extended and strong El Niño explains why India had a deficient south-monsoon and dry weather lasting through the winter this time.

And in fact, any change – either no-El-Nino, or a yes-La-Nina will be positive for agri-growth. Look at the graph here that shows it:

While the El Nino is regressing, it is still going to take a few months for its effects to wane.

NOAA’s latest forecast assigns only a 22% probability of La Niña developing in June-July-August, going up to 50% for September-October-November.

This means that while the El Nino will end closer to summer, the development of La Nina can take a while to develop.

Just the receding of an El-Nino is positive news for agriculture and the rural economy. A La-Nina will be a huge added positive but will only impact us in 2017. While the agrarian part of our economy is small, more people are impacted by it. The upcoming budget might have to soothe rural voices of distress coming after a rough season; but at the same time, we should understand that the natural cyclical weather pattern change (El Nino out and La Nina probably in) will mean a natural recovery of agriculture, and that we might not need panic measures.

Budget 2016: The Shift from Consumption Taxes to Income Tax Since 1970 in Government Revenue