The Eco Survey for 2016 is out and upon us! And in typical Capital Mind fashion, we look to dissect it to find out the points that really drive home, the key issues that face the Indian economy in the months to come. Of course, it does wax eloquent about some of the ground-breaking schemes launched by the incumbent policy-makers and its breath-taking effects on the economy, but hey, as usual, we take them with a pinch of salt. Having said that, there are some wonderful observations provided in this gem of a document, and plenty of them have been backed by data – end of the day, numbers do not lie.

Continuing on in that fashion, there is a brilliant chapter called the “Chakravyuh Challenge“. It is a fantastic euphemism for the much-talked about ‘exit’ problem in the Indian industry. Here’s what the ‘Chakravyuha Challenge’ actually means, in the CEA’s own words:

India has made great strides in removing the barriers to the entry of firms, talent, and technology into the Indian economy. Less progress has been made in relation to exit. Thus, over the course of six decades, the Indian economy moved from ‘socialism with limited entry to “marketism” without exit’. Impeded exit has substantial fiscal, economic, and political costs. We document its pervasive nature which encompasses not just the public sector and manufacturing but the private sector and agriculture. A number of solutions to facilitate exit are possible. The government’s initiatives including the new bankruptcy law, rehabilitation of stalled projects, proposed changes to the Prevention of Corruption Act as well as the broader JAM agenda hold the promise of facilitating exit, and providing a significant boost to long-run efficiency and growth.

In other words, there is a long-standing problem of capital allocation within the Indian economy. Of late, some serious advancements have been made on the “Entry” front:

However, there are significant barriers for the re-allocation or removal of funds and resources – from the inefficient and value-eroding firms to the more productive companies. That is a part of what is referred to here, as “The Exit“. Take Coal India for example – surely one of the more infamous examples for inefficient business. The Coal industry is still monopolized and the private sector is still barred from tapping this sector that is rife with many inefficiencies. PSBs are another case in point – a point that is expounded on, with the help of a brilliant example in this ‘Chakravyuha Challenge’ chapter in the EcoSurvey 2016. What’s worse, there are regulations that further exacerbate this issue –

But policy action is needed when the costs clearly outweigh the benefits, when the lack of exit generates externalities that hurt others—such as firms that have to compete with subsidised “sick” firms or taxpayers who have to pay for the corporate subsidies. Those paying the costs could well be the poor. They pay taxes, even if only indirect ones. And they may also have to bear the burden of paying higher prices while getting substandard goods and services from inefficient firms which should have exited, but haven’t. In fact, the true beneficiaries of the interventions that prevent exit may often be the rich, who own the firms.

(Note: All bold points are our doing, not the survey’s. Graphs have been borrowed from the survey as well.)

One of the main issues that corporates and money (to extend the definition) have in the Indian industry, are significant impediments to find their way out. There are a multitude of ways in which to identify and gauge this issue. One such issue identified in the EcoSurvey, is that of inefficient firms still hogging a sizeable chunk of labor and capital.

Now, normal intuition should suggest to us, that firms that are more productive and efficient, should be the ones that attract capital and human resources. Following that, they would ostensibly be the ones that survive the longest. Is that really the case? 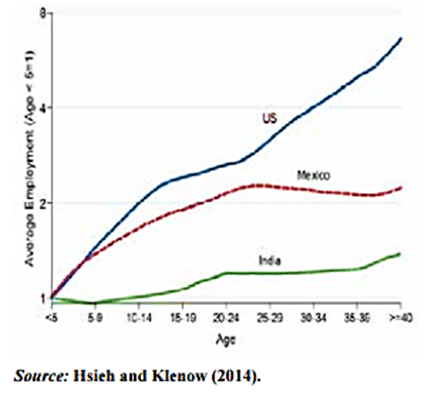 What the first graph shows, is a comparison between firms in the US, India and Mexico. As we can see, on an average, firms that are over 40 years old, employ almost 8 times the number of people that a firm less than 5 years would. Compare this to Mexico, where they employ twice as many employees. But in India, the ratio is barely 1.5! 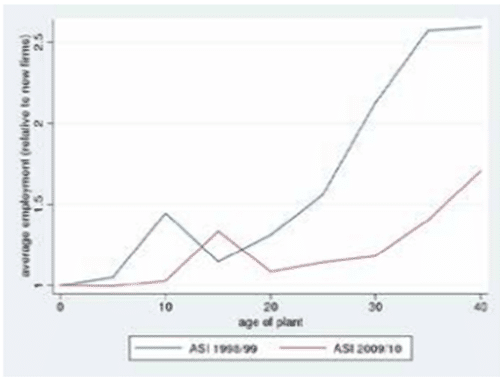 This chart goes on to show that the issue has exacerbated over the years. Older firms used to employ many more folks back in 1998-99, whereas 10 years later, the ratio has considerably reduced.

This study also brings out some interesting results from other researches conducted on the state of companies in the Indian industry, to drill home the point that the CEA is trying to make. Take for example,

Bloom and Van Reenen (2010)1 take another approach. They show that India unlike many countries seems to have a disproportionately large share of inefficient firms with very low productivity and with little exit. They assign a management practice scores of 1 to 5 (worst to best) for a sample of 695 randomly chosen U.S. manufacturing firms with 100 to 5,000 employees and the second panel for 620 similarly sized Indian ones. The results reveal that compared to the US, there is a “thick tail” of badly run firms in India. This is directly related to an exit problem in Indian industry because a majority of these large numbers of small and inefficient firms should not survive.

In the next part, the Chapter outlines some of the costs to the Indian economy, posed by this ‘exit’ issue.

Fiscal costs: Exit is impeded often through government support of incumbent, mostly inefficient, firms. This support—in the form of explicit subsidies (for example. bailouts) or implicit ones (tariffs, loans from state banks)—represents a cost to the economy.

Indeed. We are seeing the ruinous effects of this cost, be it through continuous re-capitalization of PSBs, ineffectual Bailout programs, cumbersome processes of settlement through Debt Recovery Tribunals and so on.

Economic costs: Economic losses result from resources and factors of production not being employed in their most productive uses. In a capital scarce country such as India, mis-allocation of resources can have significant costs.

This goes against the definition of a free market, wherein resources are allocated to its best use – which in turn, is decided by the markets.

Political costs: The lack of exit can also have considerable political costs for governments attempting to reform the economy. The benefits of impeded exit often flow to the rich and influenti
al in the form of support for “sick” firms. This can give the impression that governments favor large corporates, which politically limits the ability to undertake measures that will benefit the economy but might be seen as further benefiting business.

A problem that we have been struggling with for a while now. Curiously, this is exactly what the current government had been “accused” of even before they came into power – of being a business-first policy regime. The CEA cleverly and subtly underlines why that is a misnomer.

In our next post on the ‘Chakravyuha Challenge’ we will talk some about the examples enumerated in this Chapter, as well as the possible solutions suggested by the CEA.