What if you had invested in the Sensex, every month, with the same amount, over the last five years? (Called a Systematic Investment Plan or SIP)

Answer: Less than 5% Per Year.

(Add another 2% for dividends, and remove about 1% for costs – either as ETF fees or otherwise – and you still get just 6% to 7% on the Sensex for five years)

This is where you friendly advisor will tell you – Look, think 10 years, because five years isn’t long term.

If 10 year returns suck, the long term will become 20 years. Or till you retire. Or till you die. It’s a very good argument.

Contrary to popular notions in the US, in India active funds have done better. Let’s go back to 2010 and choose the top funds as of December 2010 (which were considered best performing then). These are funds you were expected to choose – I found an article (Forbes) that mapped the “best” of 2010. Let’s assume this would have been your investment source – and you selected the top funds there. I added one more – a fund called Quantum Long Term Equity – which has low costs.

Have they beaten the index? Assume that with dividends you would have made about 11% in 3 years (or 10 years) and 6% in the five year term (I’ve added one passive index ETF – the Nifty ETS fund)

Note – this is point to point returns, not SIP. (Have compared the ETF to it) 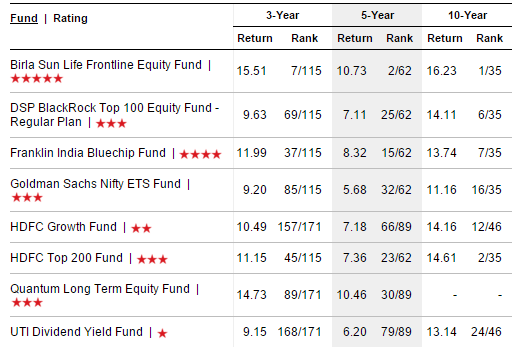 As you can see – in the five year period all of the funds that were the top funds in 2010 have beaten the index (as measured by the Goldman Sachs Nifty ETS Fund, an ETF)

Note: Manoj Nagpal brings to my notice that Nifty ETS has given out dividends. If we added those, would things be different? They have given, in the past five years, between 1% and 1.5% as dividends so we could technically add that to get to 7%.

Also, all the above are point to point returns, none are SIP. SIP returns in these funds could be far superior!

However, Returns Continue To Suck

The best fund has given a five year return of 10.73%? Give me a break, please. (Don’t tell me to choose a fund which you know TODAY has been better performing – in 2010, there was no way of knowing which one will outperform. You only had past data)

Yes, the 10 year period has been good, with the ETF returning 11% and the other funds returning 13-16%. The outperfomance is not small – over a 10 year period the difference between Rs. Five Lakh invested at 11% or 13% is massive:

So 2% outperformance is not a small thing in the longer term.

Still, we consider the last 2005 to 2008 time frame an anomaly. They were really really good years; but if you consider the last five, things have been horrible. The five year returns of 6% to 10% are just about beating inflation, even if they did beat the index. This is not what you want when you take the much higher risk in equities.

(In fact, you would have gotten about 9% compounded gains through a liquid fund!)

Also, in dollar terms, India’s been a waste of time if you got those returns since 2010. The rupee has fallen from Rs. 45 to the dollar, to Rs. 66 in five years – and a fund manager that made 8% a year just about returned the same number of dollars after five years.

As much as I love investing, it’s getting obvious that the returns offered by indexing or mutual funds will probably be dissatisfactory. I’ve taken a more active route – direct investing, targeting absolute inflation adjusted returns. What would you do?

And of course, did the above data make you think about a change?