The Bank of Japan now went even more ballistic . Not that they weren’t earlier, but now they’ve upped the ante a little bit  more. The BOJ today moved interest rates to the negative zone  – from +0.1% to -0.1%. Meaning, if banks deposit money with the BOJ, they will get back less than they put in.

And the Yen went down with the USDJPY crossing 120. 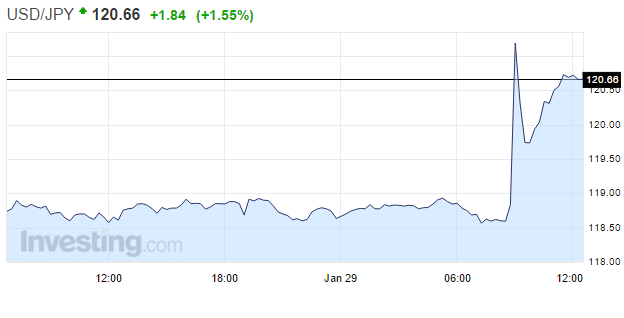 Negative interest rates are not new – Europe has had them for a while, and it’s not helped. The idea they’re trying to communicate is: you can’t park excess cash with the central bank because of negative rates. You cannot offer negative borrowing rates to depositors (who could simply move their money into cash and that will kill the banking system). So if you offer positive rates to depositors you must lend that money at a higher rate – so it encourages lending.

But the underlying premise is: Banks create money so they would be happy to lend if there were decent companies to lend to – at least at that scale. They don’t want to lend where rates are higher because the risk of default is even higher. They might actually be happy to cut deposit rates to zero and hold the money until they find opportunities, rather than lend risky. That’s how Japan has been for 20 years!

They want 2% inflation, at any cost. That idea has made the Japanese Central Bank, the BOJ:

Imagine, a central bank that invests about $60 billion in buying government bonds, private bonds and equities! If a country like India had done even one of the three, everyone would be screaming hoarse about how we are monetizing our deficit, we are propping up equities etc.

Japan’s economy minister abruptly resigned on bribery allegations yesterday and was immediately replaced. The new minister is expected to continue the madness.

Our View: This is insanity. Negative interest rates won’t change anything. I don’t think inflation will come FROM these measures; it might be something entirely different that drives it. But this measure will ensure they live in zombie land for a while, until one fine day they are in such a mess that they can’t unwind any of these measures in a hurry.

In the words of John Mauldin, Japan is “a bug looking for a windshield”. This may not end soon, but it will not end pretty.