Indigo’s stock has fallen over 25% in two days. While I’ve been very appreciative of the aviation business and Indigo in particular, this is time to take stock. And we have been long at Capital Mind Premium, though we were out at 1160 due to a trailing stop loss. But the stock fell from the 1200 levels to 900! What happened?

(Note: this is not a stock recommendation; it’s merely news and opinion) 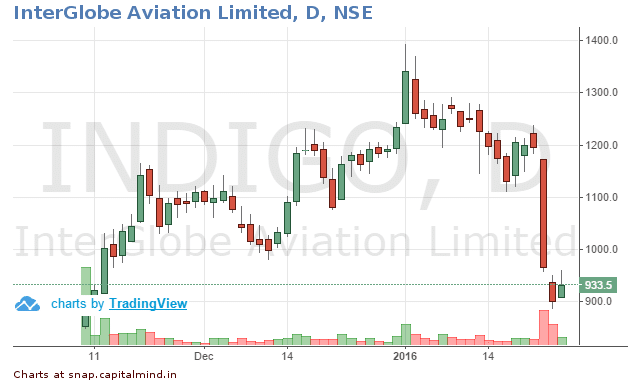 Our top 5 potential reasons – mostly after the fact, so there wasn’t a way to predict it – but these seem to have impacted it the most. Please do understand that reasons always “follow” a stock move, and any attempts to explain it should be taken with a pinch of salt. Who knows, even worse news may be ahead!

Note: The stock is up 4% as we write this, so some of the fall has been tempered.

1. The Management Told Investors to Contact Airbus About When Their Planes Will Come

Results were out the day before the “crash”, and things looked quite okay. The earnings conference call brought about some very interesting details. The one thing that really came out, right from the beginning, was the management saying something that seems way off the hook about what’s happening with the Airbus Neo deal: CEO Aditya Ghosh said something to the effect of – the Airbus Neos that we were supposed to get, have been delayed for Industrial reasons. If you want to know when we will get the deliveries, you should ask Airbus or Pratt & Whitney.

This is probably just frustration – since the late delivery news has been shared earlier in December and surely, management was being hounded about timelines. But this is really not a mature way to handle your first investor call – telling your investors to go talk to your suppliers about when your planes will be delivered. Given that they have been in the public face this long, and there have been concerns about promoters taking out money as dividend or personally owning the call centers etc., this does not give you a good impression. Tomorrow if they make a loss because crude prices went up, will they tell you to just go talk to Saudi Arabia?

Let’s hope this is a one timer and they don’t repeat this again: perhaps the 25% fall will sober them down.

2. They Still Don’t Know When They’ll Get A Neo

Indigo has 430 Airbus A320 Neos on order – 180 from 2011 and 250 from 2015. This is the largest order for that plane.The first one was supposed to come in the December quarter, and Airbus didn’t ship it. The Indigo management reported the delay but didn’t say when they would get the planes.

In January, the first Airbus A320 neo (or “new engine option”) was delivered to Lufthansa. The next one will likely to go Qatar Airways. Then it’s possible Indigo’s in the queue.

The neo aircraft are important – they have a 15% lower fuel consumption, which should matter for profitability. However, the neo aircraft seem to need a three minute idle time after starting when they can’t even taxi, and that might change the fuel consumption statistics – apparently, Qatar and Indigo want them to halve that time. Indigo will extract concessions for the delay – non-monetary or in the form of maintenance freebies or service contract changes – but at this point, it means they don’t have these planes.

The conference call didn’t show any confidence they would get a reasonable number of planes in the coming quarter. They now have 101 planes and they had, in their prospectus, mentioned a plane count of 111, 134 and 154 for the 2016, 2017 and 2108 years. They won’t make 111 in this quarter, as they seem to have visibility for just 3 more aircraft through a lease arrangement.

If they can’t make the 134 next year either, or even 20 more as earlier expected, Indigo’s growth could fall below the 20% number. At this time, the market for planes is buzzing – low fuel costs have seen a massive order for planes from Airbus, whose backlog is of 2761 neos (and they’ve delivered just one!).

The problem is the lack of any visibility and clarity. They need to get engines from Pratt and Whitney, and the plane from Airbus, and if they don’t really known now when they will get the first plane, then it kills investor enthusiasm for the road ahead.

3. There is no adequate explanation for a sullen Q2

While the Q2 is generally low in the industry, the issue has been of higher rental costs plus lower revenues, and higher employee costs (as they have gotten pilots ahead of schedule to prepare for fleet expansion). Still, a drop of profits of that much is inexplicable.

This is again a transparency issue and a bad thing to have revealed late; and especially, with the Q3 results it was almost as if they were brushed away.

Average fares fell 14% Year on Year to Rs. 4517, which was a result of lower crude prices. This indicates competition – earlier they were able to retain fares even as crude fell; now, with Spicejet back in action and Jet coming out of it’s loss-making zones, there is more aggression in the marketplace. Plus, we now have new airlines too that are operating within India.

A price war will not help Indigo, and I’ve been quoting that as a key risk. The industry is built to suffer losses every time they get into a profitable zone; we have seen that with Air Deccan, Kingfisher and a whole host of airlines that are now dead. While we don’t see Indigo going down that route, a price war will depress their profits, and it’s quite likely that the rewards of a growing market may not be on their own bottom line.

Only 13% of Indigo stock is public, and as of December 31st, about 5% out of that 13% was held by Foreign Institutional Investors (FIIs).

FIIs have been continuously selling Indian shares – of all sorts – in the last two months. In January, they have been net sellers in almost all days except two.  FIIs hold about 40% of the free-floating shares of Indigo, and if they decided to sell too (for any of the above reasons) the Indigo stock will hurt. And it will hurt more than other airline companies where foreign shareholding is a lesser percentage of free float.

Indigo’s marketshare of 35% and its past growth should command the 20 P/E it was getting, especially with a current growth of about 20% and an EPS of about Rs. 60 for the year. The lower aircraft growth, and the lower fares might hurt profit growth going forward. The airline however has an impressive record of dealing with down turns, and we attribute the co
cky statements currently to the lack of public-management experience. It’s a large company – at 2000 cr. profits and a 40,000 cr. market cap. If India’s futures is in greater growth of air travel – given the nature of our roads and undercapacity in train traffic – then companies like Indigo should continue to prosper. Yet, we have to be careful, and it would be wise to only take positions based on the comfort with all the above factors and with the airline industry in general.

We don’t have a call on this stock at the moment.

Disclosure: Author has a small position in the stock. No positions in Family, or by the company. No 1% holdings.