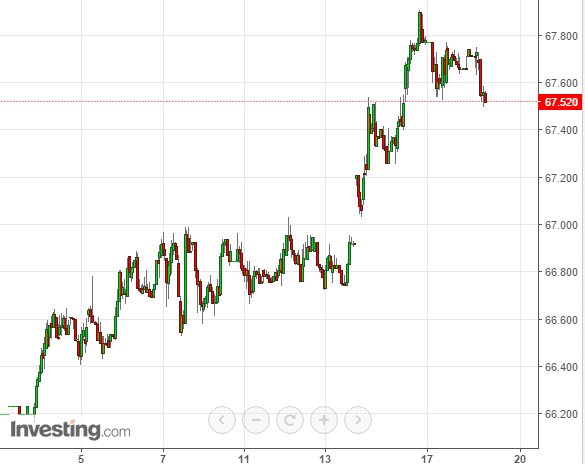 Why is the RBI buying bonds?

Because it’s selling dollars.
Let me explain.
The rupee was falling, and falling fast. The RBI wants to defend 68 (and I think, 67.8). In 2016 from Jan 1, the  rupee has moved from 66.2 all the way to nearly 68 – which is when the RBI seems to have stepped in.
The rupee has been falling – or rather, in the graph below, the dollar has been rising, due to multiple factors – one, that foreign investors are exiting in droves. Two, that internationally, the dollar’s gaining strength. In order to defend the rupee, the RBI has to sell dollars.
When it sells dollars, it gets rupees in exchange – and those rupees then get “extinguished” – or in other words, go out of circulation. Remember that RBI has assets and liabilities. It’s assets are
a) Government bonds
b) Dollar reserves
c) Gold
d) other stuff
And it’s liabilities are: Rupees that it has printed.
When the RBI sells dollars, it reduces it assets. Since it has now received rupees that it has printed, those rupees offset the liabilities and effectively, the RBI’s balance sheet reduces to that extent.

But There are Lesser Rupees Out There! See What Happened in China

The Rupees that go out of circulation therefore aren’t available to other banks, so the total rupees in circulation reduces.
This can cause a liquidity challenge, which can hurt by spiking up short term interest rates.
A similar situation happened in China recently. China’s been trying to defend the Yuan Renminbi from falling – and they seem to have seen big exits from their country. And when they did, they ended up spiking overnight rates to as much as 66%! Same issue – yuan went out of circulation when the Chinese Central Bank sold dollars, and that reduced the availability of yuan, which means short term rates will go up as demand is greater than supply.
In India, there’s been no such event – short term rates are still benign. But given the liquidity situation a strong defence of the rupee may take a toll. The RBI is just setting the stage so that there is no liquidity crisis at the same time as RBI sells dollars.

It has no major options – the other thing it can do is to buy Gold, but that won’t help at all. It has to replace dollar assets by some other assets, and government bonds are good.
Rs. 10,000 cr. is just about $1.5 billion now, and that’s not a lot for a defence, so we can expect that there will be more OMO as they spend the dollars by selling them, while replacing them by rupee bonds through OMO auctions.
This will probably stop if FIIs stop selling Indian equities and go back to purchasing equities, but if the selling intensifies, such OMOs will be common.
Note: if you’re not confused already: the RBI is also helping sell government bonds – worth rupees 14,000 cr. on Jan 22. This sounds shady but is not – the proceeds of that go to the government, which is an entirely different entity than the RBI. In effect, RBI is just the government’s broker. You might say that the government is issuing bonds to banks, which are selling bonds to the RBI through the OMO auctions, so effectively RBI is buying bonds from the government. Yes, and that is exactly how the US Fed, the Japanese Central Bank and the European Central bank have been operating. This is however not “QE” – as the central bank isn’t adding liquidity, it’s just keeping it balanced to offset the dollar sales.


Also read: Why does the RBI sell bonds?
And: Why RBI Buying Govt Bonds is Not A Big Deal