Maruti – the family name of the 90’s is India’s leading passenger vehicle company and formerly known as Maruti Udyog Limited, is a subsidiary of Japanese automobile and motorcycle manufacturer Suzuki.

The company has come a lot far from its initial production of the Maruti 800, based on the Suzuki Alto kei car to the latest Premium Hatchback Baleno. Total Investment in the Baleno Model stood at 1100 crore between Maruti and its Vendors. As of 27-Oct-15, the company had received 2500 confirmed bookings and an additional 600 new bookings after the price of the vehicle was disclosed.

The company, however has seen its stock tanking in the last month.

Here’s a quick take on what Maruti does.

Both its plants are currently close to 85%-90% production capacity i.e. 1.55 million and other than the Gujarat plant there are no plans for any further capacity expansion at Gurgaon and Manesar. With the way the economic turmoil is setting in, it hardly looks like there would be a need for productivity stretch at the plants.

Automated Manual Transmission or AMT production capacity is currently at 4k units which is being expanded to another 4k units per month thereby taking its count to 8k units a month.

(AMT is a Conventional manual gearbox which remains unchanged, which has an electro hydraulic mechanism for automating gear shifts.  The AMT operates on the manual transmission of a car just like a driver would. It opens and closes the clutch, and engages and disengages the gears – both these control movements are executed by hydraulic actuators which in turn are controlled by the Transmission Control Unit or the TCU – replacing the hands and the brains of a driver. This entire unit is delivered to a manufacturer as a sealed unit which the manufacturer then incorporates within the conventional gearbox assembly)

The company has also increased both its R&D capability and its budget. The new numbers were 1300 personnel with all the technological hardware in place. The company hopes to decrease it product cycles (one product cycle is 4 years). Design takes 2 product life cycles along with developing the body, platform and then engine modification. Also unknown fact is that the S-Cross Engine has been designed by a joint collaboration of FIAT & Suzuki.

The company hopes that the Capex for this year will be ending at 3500 Cr. which is bifurcated among Infrastructure, R&D, Marketing, Product development etc. Both its plants at Gurgaon and Manesar go through their annual maintenance and the capex on the maintenance of the two plants would be 1,000 to 1,200 crores for the year ending March, 2016.

This is basically the amount that Maruti pays to Suzuki as Royalty fees. Royalty averages around 5.5% to 6% as has been seen over the years. Royalty for Jul-Sep, 2015 was 5.9%. Royalty for Jan-Mar, 2015 stood at was 5.4% while for Oct-Dec of 2014 stood at 5.7%. For the period Jan-Mar, 2016 the company hopes the Exports of Baleno to Japan would act as a natural hedge and the company going forward ensure 1/3 of the exposure is covered.

Since the Royalty agreements for models including Baleno were entered into quite earlier, the company has started discussions on having a INR based Royalty payout going forward so that it mitigates the forex risk on Yen.

With its erstwhile partner due to start its operations in Gujarat with a target of 20 new launches over the next 5 years, Maruti has taken the lead. The company for this year since April, 2015 has made 3 new vehicle launches in addition to its Exclusive Nexa showroom launch. 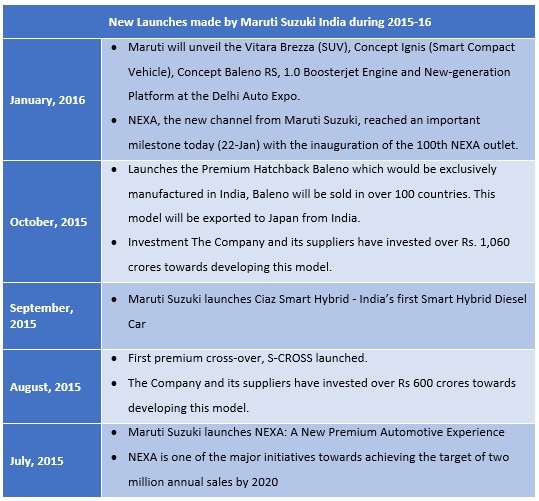 Industry Diesel sales declined by 2.3% while for Maruti its Diesel portfolio grew by 8%. Initial Diesel Engine Capacity stood at 3 lakhs and the company has added an additional 1.5 lakhs capacity during the year. Diesel Sales stood at 83,571 units, 85,500 units and 87,329 units for Oct-Dec of last year, Apr-Jun, 2015 and Jan-Apr, 2015 respectively.

The Dealer Inventory for the period Jul-Sep, 2015 stood at a little over one month in view of the festival season which has stretched over 2 months (Navratri, Dussehra +Diwali). To maintain momentum in rural markets where the growth is showing up in double digits, the company is looking to add another 25,000 villages to its reach thereby taking the total coverage to 150,000 villages in 2015-16. Sales to smaller towns was more than 30% of the total sales during 2014-15.

This does not deter the company from launching new models targeted at the Urban population. Currently the market penetration is 18/1000 in India and there is the huge emerging middle class population that the company looks to makes it numbers from.

First time buyer for Maruti has stood at an avg. of 44%-46% for the year (this means that of every 100 customers, 44 customers are new buyers while the remaining 66 buyers are either looking for replacements or additional purchases).

The company currently exports to countries such as Sri Lanka (duty reduction helped improve sales, howeve
r there has been some changes made to the way these are calculated and the Sri Lankan authorities are currently revising these),  Algeria, Chile, Angola, Peru, and Indonesia. Annual Sales for 2014-15 to Non European markets crossed 100,000 units.

The company also faces challenges in Export markets due to the fall in commodity prices. Currently the company has 3-6 month long set contracts for raw material acquisition and with the Indian government putting an anti-dumping duty in place has seen a small increase in the prices of raw materials. The company also missed a shipment of 500 units during Jul-Sep, 2015 which it hopes to have achieved during Oct-Dec, 2015.

Lets take a look at the Exports growth (Units and Revenue): 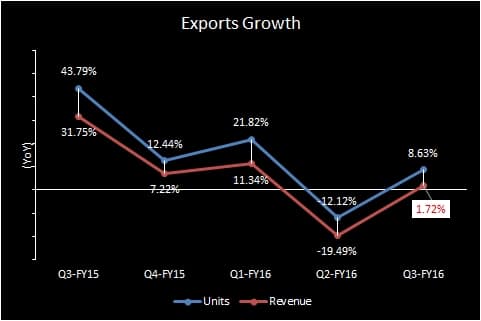 Note: Export Revenue for Oct-Nov, 2015 is TBD (to be disclosed). The Export numbers were revealed by SIAM. However, the financial results i.e. the Exports Revenue are expected to be announced during the Earnings Call on 28-Jan-16. The numbers stand updated today the 31-Jan-16

The Yen equation with the rupee apparently plays a very big role in Maruti’s fortunes. Livemint even says that it’s been the most important variable for profit in the last 11 years. Maruti pays out royalty to the Suzuki parent, and buys raw material from it. With the recent fall of the rupee, the equation hurt Maruti and the stock fell over 15% from the highs of 4,600 to 3,800, while the Yen fell about 8% from 54 to 58.

We aren’t making a call. The results are out soon and that will help refine matters more, but it provides the basis to make a decision. We will come out with more such notes in the future.