The Trade Deficit for December 2015 widened as Indian Imports increased more than exports. The trade difference has also expanded due to increased Gold imports – which rose 179% to $3.9 billion in December. (Remember though that December 2014 – a year ago – was when gold curbs were only just opened, and gold imports started to rise from nearly zero) As we get through the cycle the year on year numbers look better now, but there’s been a lot of damage. Oil imports have been flat – as crude has flatlined. It’s down 33% from last year but on par with November. But Non-Oil imports (this includes gold) have gone up considerably. 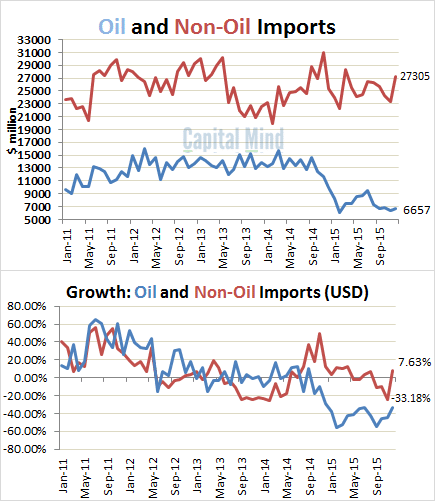 After months of falling, average daily trade (which smooths out the monthly numbers since months have a different number of days) has recovered a little. This is on the back of increased imports of course. 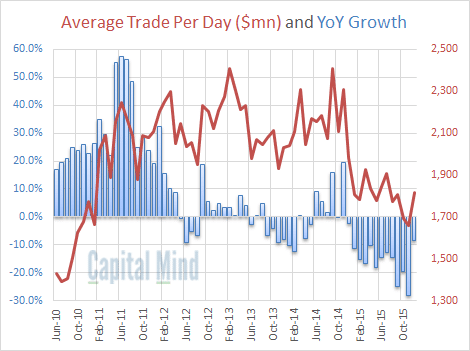 Note that the numbers, while they seem to have taken a pause are still not that great. Europe’s in a recession, the US isn’t exactly making up for it, and our other partners like China and Africa aren’t doing that well.

With imports increasing, there is a small hope that the economy could be seeing a recovery. We aren’t seeing this in overall numbers, but let’s hope it isn’t concentrated on Gold alone.

The problem – that isn’t visible in this data – is that services export growth has stalled too. This is going to hurt, because service exports generally help make up for our deficit on the trade side.

Lastly, the rupee is at 67.68 and near its all time highest trading value per dollar. That makes the dollar very strong, and that should help our exports. If it doesn’t, we can only say that people don’t want to buy from us even at lower prices, while we continue to demand imports even if prices are higher. Or, imports are not price sensitive, but exports are. That doesn’t augur well for the future.

The important thing now is about Chinese devaluation, but honestly, India’s devalued too. Exports are going to be a concern since world growth has slowed; it may actually be better to focus on import substitution than to wait till western economies recover.