The Index of Industrial Production (IIP) for November 2015 came in at -3.2% which should be a real cause of worry except for: The Diwali Effect.

We wrote about this last month:

Why? Because of Diwali and Dusshehra. The dates for these festivals are variable, and typically there are a lot of holidays around them. Factories are shut, workers take time off etc. Production is hit.

When Diwali is in November and Dussehra is in October – which is most of the years and in 2015 – things are fine. Holidays are spread across two months, and the production impact isn’t so bad.

When Diwali and Dussehra are both in October, the impact is huge – and this was the case in 2014 and 2011. And the subsequent Octobers, when the Diwali moved to November, we find a pretty big jump in IIP.

This impacts things when in two consecutive years, Diwali and Dussehra are not in the same months. In 2015, they’re spread across two months. In 2014, they were both in October. So the data will look bad or good, and you can’t take the headline figure for granted.

Here’s the IIP this time: 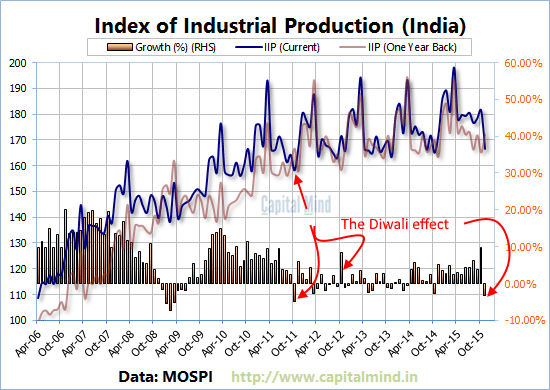 What if you smoothed out the Diwali Effect?

To remove the Diwali impact, the production data can be smoothed – just take the average of October + November!

That is however a bad number; but at least it’s above zero. It’s not a sign of an improving economy (since 3.2% is less than September’s 3.84%).

They’ll all look bad because of the Diwali Effect: 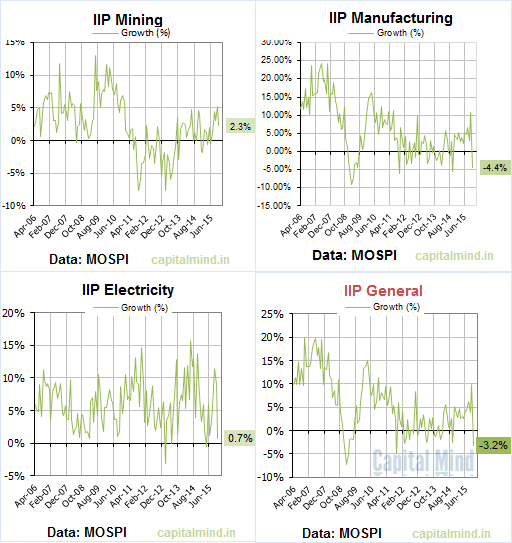 But if you smooth them out it looks a lot better:

There’s another way to look at IIP: 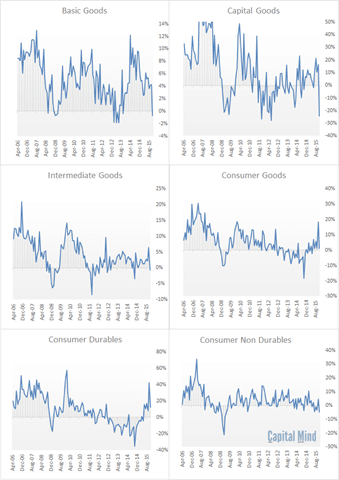 Again, this is distorted like crazy so there’s no easy way to make an analysis out of it.

Our View : Not great if you smooth out the Diwali Effect. Not so bad as the headline indicates. This is not likely to move markets.