We know that the Chinese Yuan is weak. And that apparently is making the rupee weak, and as we noted, RBI is setting up its firepower and strongly defending 68 (by selling dollars). But look at how other emerging markets have done. Brazil, Russia and South Africa have seen the dollar rise more than 40% compared to their currencies in the last year. India’s only seen a 7% rise, and China, 6%.

India is relatively decent, and our fears about a large fall are valid given our corporate and bank borrowing abroad. But imagine the same situation for Brazil, Russia and South Africa! 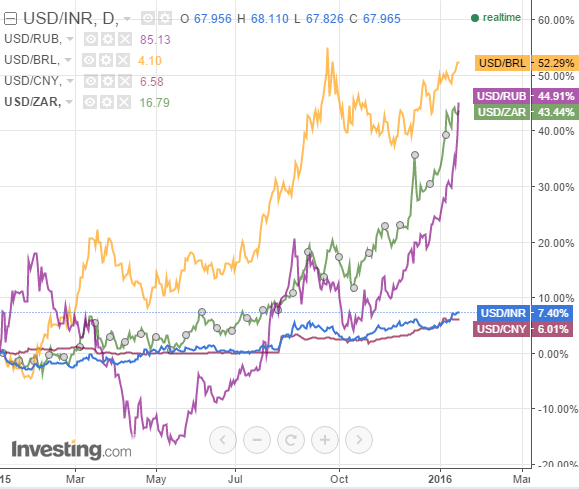 The Chinese Yuan too hasn’t fallen that much; and in 2016 itself, the comparison shows you how bad the situation is for Russia and South Africa. 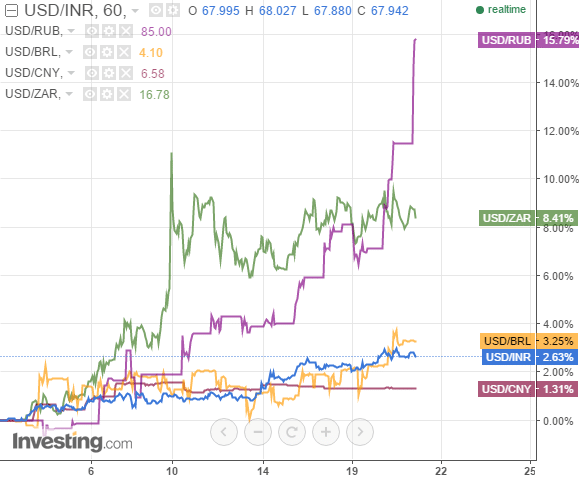 1) The Chinese devaluation won’t hurt us that much. We complain about our exports getting hit, but their devaluation is under control as ours is.

2) Our exports to Russia and South africa will hurt. We don’t do that much business with Russia anymore – but we do import fertilizers from there (our local producers will hurt if those go up) and export Pharma products to it (Dr. Reddy’s for example). (Source)

4) Our companies compete against these countries in many areas – steel, for instance, where Russia earlier dropped prices by 1/2 in 2013. Now they can drop them another 25%. Our steel companies are struggling already; they will struggle even more. We also compete with Brazil in Coffee and Sugar.

5) The macro situation for India doesn’t look all that great at the moment, but we still remain a better performer than these countries. But it’s quite likely that their pain precedes ours; we were never an island, and will get impacted down the road.