Earlier this week, we had analysed the best performing Large Cap stocks (some of whom had returned more than 100% this calendar year!). Continuing from where we left off, we are looking at those Mid Cap stocks that have outperformed their peers this year; and boy, are there plenty of those! What a topsy-turvy year 2015 has turned out to be for the markets! The Nifty and Sensex had been beaten down, falling by 4.5% and 5.0% resp.

For all You Investors: As 2015 Ends, we Usher in 2016 with Notes of Optimism and Caution Alike

2015 in Review: Let’s Put Inflation into Play and Watch What Happens to the 2015 Nifty Levels

2015 in Review: Sector Moves; Which Industries Beat the Market and Which All Struggled

The Nifty Midcap 50 is an Index of stocks that have an “Average Free Float Market Cap” between Rs. 1,000 cr. and Rs. 5,000 cr. The stocks should also be a part of the Derivatives segment. The Midcap 50 has increased ever so slightly in 2015; a gain of 1.54%. Compare this to our Top 10 Midcap performers for the year:

Gayatri Projects has returned an absurdly high 354.40% to its share-holders this year. The stock saw much of its appreciation in May this year. For a whole year until then, the stock had been languishing at its Rs. 160-170 levels. 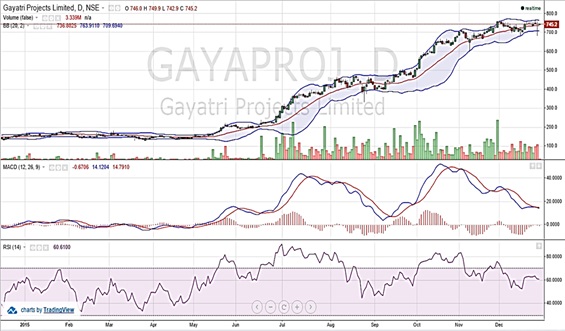 The company is in the Infrastructure business, more specifically – irrigation, Build-operate-transfer, industrial buildings, Roads and Power transmission projects. The company has been listed since late 2006, with its first Road project being secured in 1990. Gradually, it diversified into Manufacturing (Sugars & Bio-organics), Hoteling (Park Hyatt) and Power (through its subsidiary Gayatri Energy Ventures).

Let’s take a closer look at their performance this calendar year – has it really justified the 3x-plus returns?

So what does explain the fantastic returns that this stock has provided?

Having said that, at nearly 63 PE, the stock is expensive. But with the great expectations that are currently following this sector, the growth story could be soon catching up with the valuations!

JMT Auto’s stock has returned 311.6%; a close 2nd on our list. This is from the infamous Amtek stable, and is a part of the continuing drama as Amtek unwinds itself. 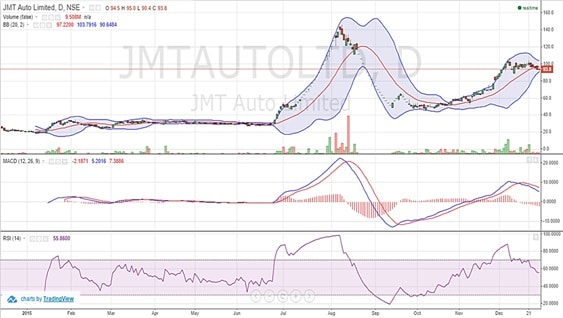 Ever get into a situation, looking around you, wondering what on earth just happened? How did that just go down? That doesn’t make any sense… Well, this is the market version of that.

Sangam India, in the Textiles space, saw their shares rise 293.20% this year. 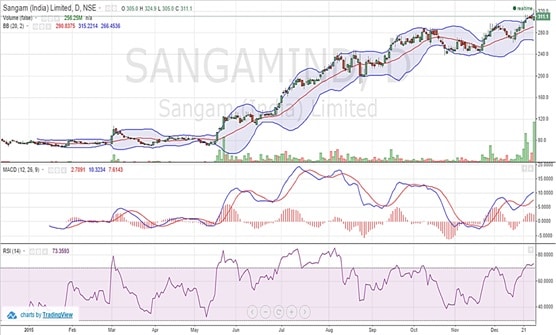 Tata Elxsi is not your run-of-the-mill IT/Software company. It is a more new-age IT products/design/software support company that also has an in-house incubator to support start-ups. Most of their revenues come from the development of electronics that are used in the automobiles and broadcast industry. 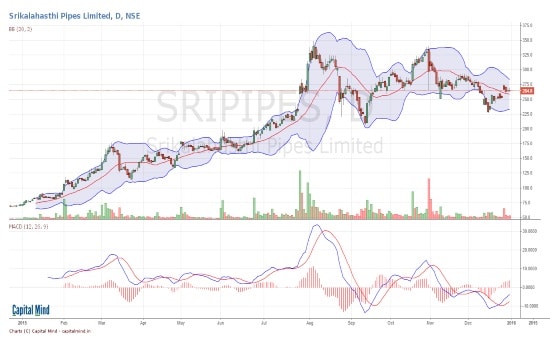 What has led to its rise? 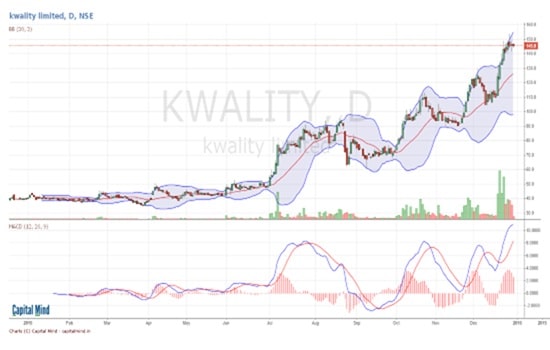 Kwality is a dairy products company that was initially established in 1992 as a backward-integration division of Kwality Ice Creams Ltd. The company’s stock has returned 260.1% this calendar year!

A quick snapshot of their business:

The company’s Annual Report for 2014-15 makes for fantastic reading for those who want to know more about the industry and its future prospects. 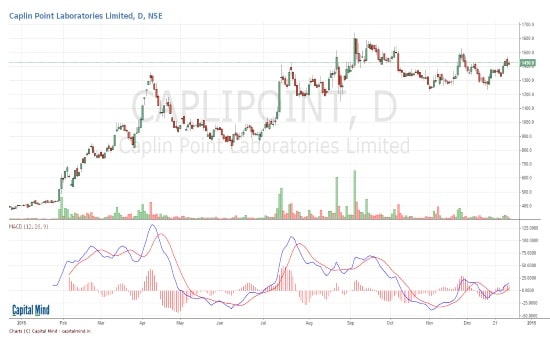 With a return of 249.2% in 2015, this is the best-performing Pharma stock in the Midcap space. Caplin Point was established in 1990, and its initial products were ointments, creams and the likes. It was then listed in 1994 and used the proceeds to set up a new manufacturing facility.

The company focuses its business in the countries of Latin America, the Caribbean and some parts of Southern Africa. Interesting Snippet: Caplin Point was listed on Forbes Asia’s ‘200 Best Under a Billion’ in 2015 and 2014. They are looking to increase their footprint in these geographical areas, and eventually extend into Brazil and U
S in the years to come. 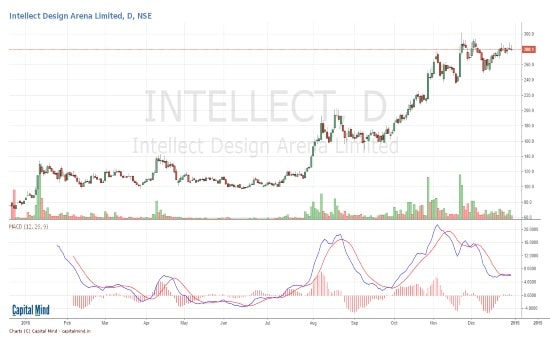 Intellect is an IT company that focuses on building products for banks. They develop a suite of products that covers divisions such as Consumer Banking, Risk & Treasury Management, Transaction Banking and Insurance. The company got listed only on December 18th, 2014, so there isn’t much by way of comparable prior financial statements to analyse. (They were demerged from Polaris)

The Pharma sector has been the best-performing sector by far this year (Check out our Analysis of Individual Sector Performance in the Markets: 2015), outperforming the Nifty by a cool 10%. There were 2 Pharma companies in our Top 10 Large Cap list; continuing with that trend is Jubilant Life Sciences in the MidCap space, our 2nd Pharma company. 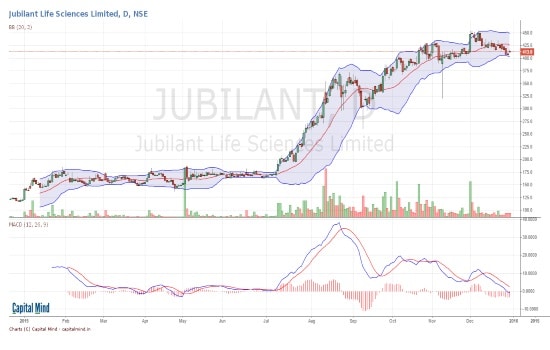 What a fantastic move for this stock. A 239.10% up move in a single year. The company had plenty going for it this year as it stage a remarkable turnaround after a tumultuous 2014. The stock had hit its all-time high of Rs. 454.9) in the first week of December.

To round off our Top 10, we have a Cloud Solutions company. 8K Miles’s stock has provided its investors an incredible return of 238.0% in 2015. 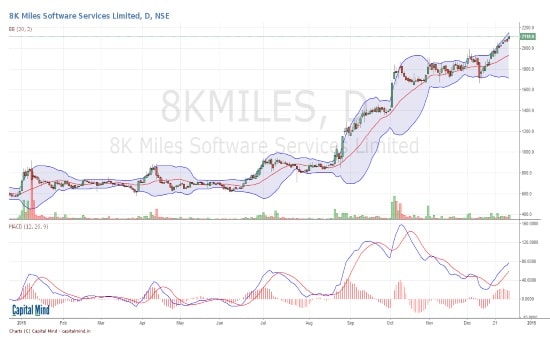 This is a company that is highly differentiated in the Software industry with a variety of cloud-based solutions and products. They have been recognized by the industry in India and the US (where they are headquartered) and have won a host of awards for their innovation.

There we have it! The Top 10 performers in the Mid Cap space. It is fairly evident that most of the companies that have gained big time in these markets, are those with a good growth story ahead for them; companies that have exciting products in store and are looking to continually expand both their product offerings, and their geographical presence. Some of these listed above, have also managed to stay almost debt-free as they embark on their expansion plans.  Let’s have a look at them after 2016!