The Finance Ministry has released the report on the “Revenue Neutral Rate” for GST. This may be purely academic because the thought of going to jail has spooked the Congress High Command so much that they won’t let the bill pass – but let’s look at the key aspects of that paper. Its boring to read if you don’t get it but you’ll get the gist here: Kitna hai boss?

Firstly, The Numbers. They’re Anywhere Between 15 and 19%

Yes, that’s the point. The real number is mentioned as 17%. This is the table that matters:

Apparently, the CPI (Consumer Price Index) isn’t going to be hit so badly, as not much of it will be taxed. Food for instance will not (only packaged food will). So the tax hit due to GST may not increase CPI that much. Plus, where there is no tax, the input taxes cannot be taken as credit. When you are able to offset input taxes, the net tax impact is lower.

There are various ways they have used to calculate the impact but it varies from 0.3% to 1%. However, after a year, the base will include GST so inflation impact will become nil.

There are Three Approaches to the Calculation of GST Rate

And the rate for each of them is like this:

The committee has done some mathe-magic on the numbers to come up with their calculations, but it’s roughly in the ballpark range.

What About Other Countries?

India isn’t the first to get VAT or GST, so here’s the situation elsewhere: 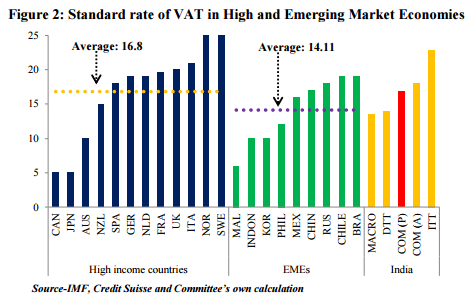 Given that no one will let gold go in at 15% VAT, and that the “lower” and “higher” rates will be in play for preferred and sin goods, we will see a standard rate around 18%.

This is lousy for service companies like banks and mobile phone companies as the tax implication is larger. For those of us who use these services, the impact is greater. And the GST doesn’t change many things for manufacturers in the near term, since they will still be worried about whether they will really be allowed to offset all inputs. Plus, all state collection infrastructure (check points etc) need to be disbanded and they will go kicking and screaming. Meaning: things will take time.

However in the long run a properly implemented GST can be hugely beneficial. And if done right the rate can actually be reduced, because the massive compliance benefits will help push greater trade and business – more volumes means that the same tax revenue can be obtained by lower rates too. (Though our greedy politicians will not think this way, we know).

GST will hurt more than it helps, when it comes. We’ve seen the service tax hike from 12% to 14.5% already hit us. The next thing now is the GST, and while this government had promised lower taxes, all we’re getting is higher taxes.