India’s GDP growth in the Sep 2015 quarter came in at 7.4%, which would be awesome, except that it’s the “real” GDP, which is the number that you can see (“nominal” GDP) minus inflation. This time, apparently, the nominal GDP growth was LOWER than real GDP, at 6.04%, which means inflation is negative. 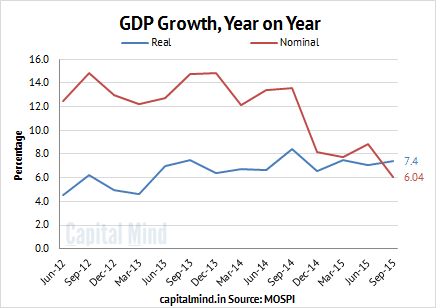 This kinda sorta makes sense, you might think. Look, the oil price crash (which happened at the end of September last year) has seen the oil prices fall tremendously. We have seen nominal GDP growth fall tremendously in December 2014. Metal prices have now crashed. Much about everything in the rest of the world is running on lower prices.

But for India as a whole, consumer price inflation is still above 5% and remember that consumption by private entities forms a huge part (over 60%) of the GDP. Which begs the question – what fell so much to offset it? It’s a little difficult to believe the 7.4% headline real GDP number. 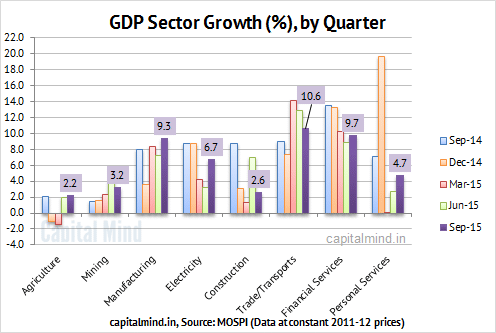 Private Consumption is like 60% of the GDP, and it grew at 6.8%. This is the lowest in three quarters but at least here, nominal growth is 8.3% (which means an inflation of around 2%). 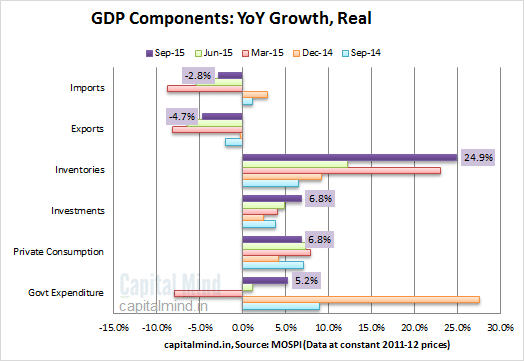 The Inflation Component: Deflator at -0.6%

The difference between the nominal and real number is the GDP Deflator. It’s not an arithmetic difference, it’s a formula. (Nominal divided by real, and year on year change of this number)

That deflator has fallen below zero: 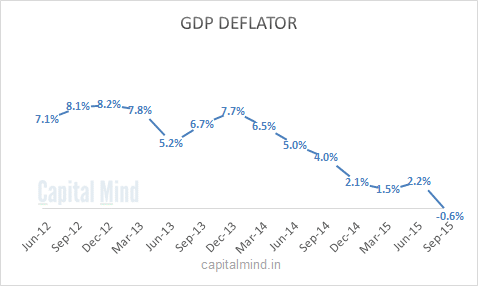 Which means we have a high GDP growth number primarily because numbers say we are seeing deflation. Okay, “Disinflation”. Whatever. Prices are down, it seems, at least for this calculation.

If we look at what forms the 7.4% growth, the picture is: 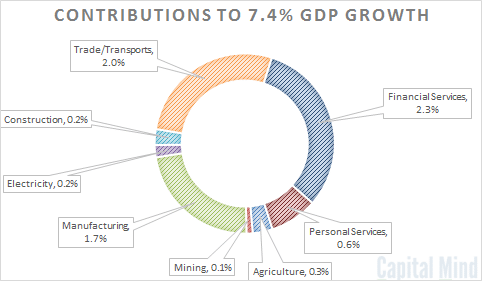 Financial services did well – and most of that we think is because banks haven’t taken the hit on NPAs yet. When they do, fin service growth will drop.

Manufacturing is inching up and was responsible for 1.7% of the growth. The rest are just tiny.

And Contributions by Component: Investments Pump Up Economy

Investment increase – that is, change in fixed capital formation – has been responsible for 2.1% of the 7.4% number. And Private consumption is the biggest beast – responsible for 3.8%, but the contribution has contracted.

The Trade deficit is a negative contributor to GDP (which will happen if real exports are less than real imports). 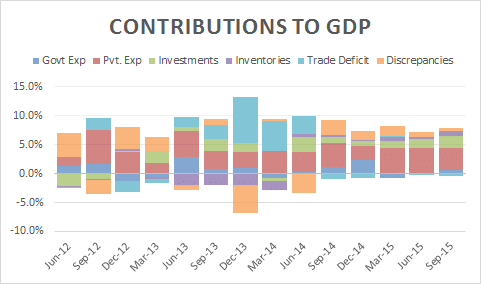 Our View: Not That Great

Is 7.4% good? Nominal growth is at 6%. That’s what we really can measure. The rest is an estimate based on inflation statistics. If you really think inflation has fallen to negative levels you might believe the 7.4% number. We don’t.

There’s no point bashing up the statisticians – they have been using the WPI more than the CPI and the WPI has been negative, and doesn’t reflect much of the economy (which is in the service sector).

Prices will continue to go up now, considering higher indirect taxes (GST will likely be at 18%) and with higher taxes on fuel. Propping up an economy’s GDP through higher taxes can only work for a month or two, and after that, consumption drops. As we are seeing now, consumption is falling.

We think this is a so-so number, and a little difficult to believe. However, the growth in manufacturing is definitely a plus. The market might not like the lower consumption figure, but higher investment and growth in manufacturing should help spur growth if consumer demand can be stoked to return. The budget is our next trigger.