We have a winner! Udayan Mukherjee on TV18:

If there’s one thing which I’ve learnt, and perhaps the only thing, is that these things which are said by investment experts, where the Nifty will be 12 months down the line, where the stock price will be four quarters or 8 quarters, is complete and absolute bunkum. You know, there is no way in the world you can predict these things.

The one things which I regret, in my career as a business or television commentator, is that we’ve played our part in leading people to a very short-termist, predictive kind of a mindset, for equity markets. That is not the asset class. I think we’ve played our part in telling people that listen to the chartists, because they’ll be able to tell you where the market will be tomorrow or next week. Listen to analysts who can predict where markets will be in three quarters time. And I think that’s a mistake. If I could do it differently, in hindsight, I would do it differently.

Because that is not how smart investors behave. They never tell you that my investment in this stock is predicated on my Nifty target of 9500 in 2016. If they did that, they would never make money. But amateur investors make the mistake of doing that; which is why they don’t end up making a lot of money, unfortunately.

The full video is here: 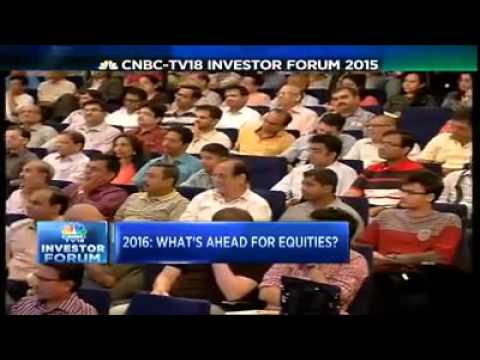 Some of this is true. I have often spoken of my distaste for predictions, even of my own. Because predictions are about a binary thing – either you get it right or you don’t. But profit is a different thing – you can make lots of little profits (you’re right many times!) and one large loss (you’re wrong once!) – which means you have a great record as a predictor but a horrible record as an investor.

But I don’t share his distaste for the short term. We have seen an incredible bull run in the last fifteen years, and a big bear market with a V shaped recovery. We would be ignorant if we didn’t know that the highs of 2007 – when the Sensex was at 21,000 – is still way higher in rupee terms than the 28,000 levels today, because if you factor in 8% inflation, that value was way higher today. We have, in effect, seen inflation lifting stocks, which is why ooh, the long term looks so good.

It’s not so great when you don’t have that inflation supporting you. When you can’t just buy any stock and it will go up. When you have that level of inflation supporting stocks, you can be the “oh I will buy for the long term” and forget about your purchases after you buy. It’s a different story now, when even stories that made great sense in the longer term are no longer so.

Having said that, the approach of asking for five stocks every hour of a technical analyst will result in, for the most part, junk. The technical analysts know it too, and they also know that you could look at any chart and come up with a bullish or bearish stance in 15 seconds, and it will sound intelligent. The channels love it, and the viewers love it, and the long term investors don’t even bother to watch TV because they’d rather read balance sheets. For the channel, it would be sinful to ignore the short term investor, but it is true, in my opinion, that they could have done a lot more to educate people on the insane risks of mad-bullish or panic-bearish behaviour.

Or, that the short term trader should focus on probabilities, not outcomes. That there’s a point about diversifying short term bets too. That a risk management framework – from sizing positions to setting up stop losses – is essential. That you need a trading log – which most channels do not maintain of their own analysts. (Btw, having been on TV, I know my prediction record isn’t good either. But all our trades, at Capital Mind, have a log, and our results have been good.) Or that you simply need to take it on the chin and accept that either a) you don’t know or b) you’re just wrong – every once in a while.

We have a new breed of long term investors on twitter who will shout out their stocks saying “5% up today” every time a stock moves. And when it falls, they are a long term investor. This is because people are thirsty for the winners, even if it didn’t matter that the investment was just 1% of the person’s portfolio and if it doubled, it would mean a 1% return for him. We are built for focussed joys, not lasting happiness. We love the adrenalin of a 5% move, but a 0.5% move on 20 continuous days doesn’t make us salivate. That is why we love reality shows, soap operas, and gambling – because something’s happening or being made to happen all the time.

TV is, really, a reflection of ourselves. Udayan walked away from it all and can probably say all that he wants with a straight face, but the reality is that he loved the short term guy when he was out there, and they loved him back. He’s now like the rich old bald man who tells the struggling young career guy that money shouldn’t be the only thing in life. Right, after you made enough of it.

You don’t get an award for dying, and that’s pretty much all that is guaranteed in the long term.

Oh and by the way, my prediction for the Nifty for 2016 is – it will move between various numbers.