Is the Ahmedabad Mumbai Bullet Train an acceptable investment? The deal is: 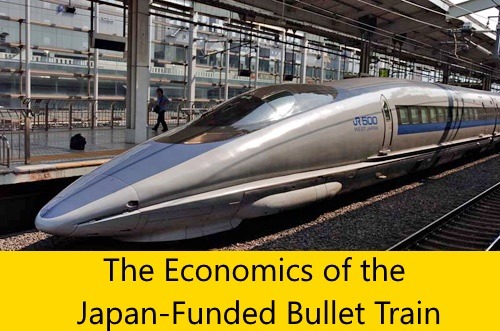 Shoaib Daniyal writes at scroll.in that it’s not a useful investment:

In fact, shockingly, the bullet train budget is 2.4X the entire amount the government of India is going to spend on the Indian Railways in 2015-’16.

The Mumbai-Ahmedabad bullet train budget is also 2.3X the entire spend of the Centre on schools. The corresponding figure for health and highways is 3.3 and 2.3, respectively.

The argument is: Don’t do it, there’s other stuff that needs to be done. But it’s not clear why we should take 8% loans to do that stuff while not taking 0.1% loans to do a bullet train.

And Vivek Kaul responds in Firstpost that:

The bullet train between Mumbai and Ahmedabad will cost Rs 97,636 crore and will be built over seven years. Hence, the entire Rs 98,000 crore (approximately) will not be spent in one year. Given this, the comparisons with the health budget, the education budget, the road and highways budget, that have appeared in the media, are incorrect.

Well, the problem is – what is the question? That the bullet train is a waste of money? Or that Japan’s loan is still too expensive?

The Exchange Rate Issue: The 79,000 cr. loan could actually be denominated in Rupees – we don’t know if not. That means Japan will take the risk of an exchange rate drop; this may not be too much, considering the rupee has gone from Rs. 40 for a 100 yen in 2001 to just Rs. 55 now, which is an annual increase of just 2.1%. Given the level of QE currently going on in Japan, it wouldn’t be surprising if they were happy to take the exchange rate risk on themselves.

Also India’s RBI has a $50 billion swap deal with Japan on the Yen-Rupee, and this could be used or enhanced to hedge out the difference in exchange rates.

Since the loan is at 0.1% per year, the return in terms of interest will be Rs. 79 cr. per year for this line.

We don’t know what the operational expenditure will be for a line like this, but let’s look at revenue. The lines in Japan can carry 13 trains per hour at 1,300 passengers each. Assuming the longer term situation is just one train per 30 minutes for about 18 hours per day, the rough plan is:

Can the project pay the loan back as well? The principal amount per year, after the 15th year, will be about Rs. 2,000 cr. per year. That should be possible if they tweak profitability, and has larger benefits in the faster commute and better infrastructure anyhow.

Note: The assumptions above are simplistic and assume costs will be less than the revenue. We have made that assumption now, but it might turn out the costs are higher, and the tickets are priced beyond the reach of a regular traveller. That could change the outcome.

Is a bullet train desirable when we don’t have enough toilets? Oh come on. I find this kind of argument distasteful. If this is the argument then I would argue that no one deserves to buy laptops or any other form of entertainment until all of India’s “basic” problems are solved – and that is a stupid line of debate.

Since the train is a luxury, it will need to generate serious employment or GDP – and will, in the years of building it, in the form of labour, steel, concrete (most of it will have to be elevated) and train equipment. We will however pay a good portion of that loan to the Japanese suppliers of certain equipment, technology or trains. That’s inevitable, and the single big reason why they are giving us this cheap loan. But we’ll also understand the technology ourselves, and it’s possible that subsequent bullet trains are made entirely by Indian companies at costs much lower. Overall, infrastructure development of this sort is desirable.

Will the government be taking on too much debt? We have about Rs. 42 lakh crores of loans by the central government, which isn’t much. This will add Rs. 79,000 cr. more (if it’s taken by the government) – but at the low interest cost this adds very little to our interest bill. (We currently pay a massive amount of money as interest, as much as 8% on each loan) The loan won’t kill us and this is precisely why we should be taking loans – to build excellent infrastructure.

This is not a private-public partnership so the execution will be done by the Railways. They’ll need a corporatized structure like the Delhi Metro corporation, and we’ve seen that succeed. There’s good enough reason to believe they might pull this off too.

Overall, the project is economically feasible, in our opinion, and it’s not a “waste” of anything. India needs such loans so that that burden of building such projects can be reduced – and we should take full advantage of Japan’s ultra low interest rates while doing so. (And, in fact, push the yen-rupee hedge costs to them if possible) We wouldn’t compare it to the cost of education or anything else – because this project can, by itself, yield enough return to pay for itself in the long term. (Education is a spend we don’t see returns from – at least not directly – so it’s most like a social spend that will help the country rather than an investment that directly returns money)

The political wizards will easily find holes in any argument because it suits their political affiliation. However, the prospect of a 50 year project will span multiple political boundaries, and in this case, the prime reason to loo
k at bullet trains is – will they be able to give us positive returns, or will they be white elephants? At the low cost loan being provided to build this project, this might be an answer well worth finding out.