This is big macro month.

On Tuesday, the RBI, in a 2 month policy note, did nothing. It didn’t just do nothing, it was expected to do nothing. The fact that it didn’t do anything didn’t change the fact that the Rupee had fallen to near term lows – and FIIs were exiting. They just continued to sell in the cash market, while paring positions in derivative shorts.

The RBI apparently is selling dollars – because it’s just announced an “OMO” (an Open Market Operation) to buy 10,000 cr. worth government bonds. While people report this is to help liquidity, it is not. There is no problem with liquidity at all. Banks are stuffed with cash – they borrow for 14 day terms from the RBI and conveniently park half of that back with the RBI overnight. The “OMO” is primarily to fix RBI’s balance sheet.

When RBI sells dollars, it takes out rupees from the system (it pays dollars and takes in rupees). The rupees inside the RBI are not available for use. (Versus say in a bank, where the bank can lend it out, and it goes to another bank account, which that bank can lend out etc) Effectively rupees back with the RBI are gone. The RBI has to “print” more rupees to replace them. But it can’t just give it away – it has to give the rupees it prints against some assets. Typically they would print rupees and buy dollars.

Not now, because the rupee has fallen significantly against the dollar and the RBI is selling dollars. So they will print new rupees and buy government bonds instead.

Typically RBI will inform the market that it plans to buy bonds, and then it will buy bonds in an auction, and pay rupees. The rupees it took out by selling those dollars get replaced by new rupees printed to buy Indian government bonds.

The RBI Didn’t Protect The Rupee Till Now

The RBI hasn’t really intervened in the rupee market till now. The forex reserve number has been constant: 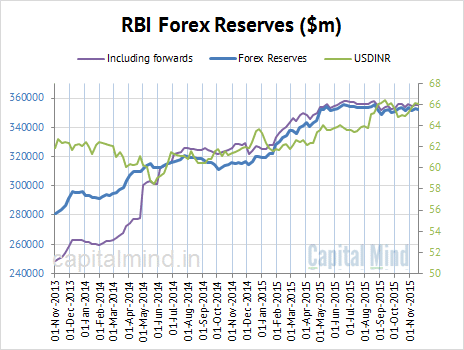 But now, since the RBI has intervened, it is taking rupees out, and to not disturb the liquidity equation.

But it’s only the Dollar, Folks?

This seems to be an issue only with the dollar – the rupee has flattened against other large currencies! The dollar strength is the concern, apparently: Why Should We Care?

The only reason is that the RBI must have sold a large quantity of dollars, and it thinks this will affect rupee liquidity. Why it chooses to protect the rupee against the dollar is obvious: our biggest imports are denominated in dollars. The dollar is likely to strengthen even more after mid-December.

In mid-December, the US Fed is likely to hike rates. And the RBI will likely protect it some more, for a while.

It appears that the RBI might try to protect 67 as much as possible. I don’t think they want to see it go beyond 68 – at least not till September 2016.

The next year will see even more forex volatility!