Medianama has a brilliant report of the Mobile Internet in India (You can purchase it here), Sep 2015 edition. From their post on it:

The quantum of data consumed on mobile grew by 127.54% while the number of mobile internet users grew by 40.40% from March 2014 to September 2015, suggesting that people are now consuming more data on mobile.

And Airtel seems to be able to charge more per user overall. But since revenue per MB has fallen, it means people are using significantly more megabytes: 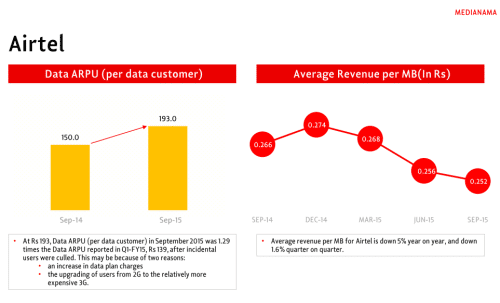 If the trend is going this way – and the report has much more – data will be more important than voice, at least in terms of growth. And a lot of data is already being used (whatsapp calling, viber, skype, facetime) for voice communication.

Plus, most connections are prepaid. Prepaid get way better deals for voice/data than postpaid. For me personally it’s way cheaper as well, and I have two sims. If data on any network is bad I just get a Sim from another network for data. This will be the future, and given that data is prepaid, it’s all about how well you provision it. Currently network upgrades – to handle the higher traffic – will be required, and the idea of tower consolidation (using one tower for a number of networks instead of multiple towers) will help.

Overall, looking at connections and user growth the obvious thing now is that all the margins for telcos will come from  expanding data usage.

What’s missing of course is the behemoth in the wings – Reliance Jio. But we’ve been saying that for 8 years now. Will they expand the market or just eat up marketshare by price cuts? Considering how much more data is growing than voice or SMS, Reliance Jio won’t even need to offer voice – it can just all be data, at a significantly lower price, and they’ll shake the foundations. (The report has more, but the impact to the top three – Airtel, Idea, Vodafone – is huge)

Disclosure: Medianama’s founder, Nikhil is a very good friend. You can assume my bias, but their content is top notch.