#general: The founder of a Chinese metal exchange has vanished

Shan Jiuliang, the chairman of Hong Kong-listed Imagi International Holdings, was last spotted at a board meeting on Oct. 15. He hasn’t attended any meetings since, and the company “has not received any notifications from Mr. Shan or any government authorities about his whereabouts,” according to a stock exchange filing. (Link)

Reliance Industries Limited is going to launch its telecom venture, Jio, on December 27. The company, on behalf of chairman Mukesh Ambani and Nita Ambani, sent invitations to all the employees to be part of RIL Jio launch.

“We want every member of our family to participate wither in person or virtually through a Jio telecast beamed live to over 1000 locations across India,” Mukesh and Nita Ambani, said in the mail. (Link)

Israeli finance technology has taken giant leaps in the last few years. Hundreds of local startups are developing new technologies for payment and security solutions, and multinational companies and banks are flocking to Israel for a piece of the action. Much like other tech sectors in Israel, the country’s fintech know-how is largely a byproduct of innovations in other fields, such as cybersecurity.

#general: Are builders finding it tough to repay loans on time?

Mumbai-based developer Hubtown Ltd has delayed the redemption date for the principal payment of NCDs worth Rs100 crore, owing to liquidity crunch. (Link)

The recent flood in Chennai has washed away the valuables of the people in the city, including white goods like television sets, refrigerators, washing machines and others. The rain, which started beginning of November and  resulted in the flood in early December, was the worst in the last 100 years.  It has slowed down the sales of consumer durables in retail outlets initially, but the segment is expected to see at least 20-25% growth in near future, according to industry experts. (Link)

Office space absorption rose by 17 per cent this year to 35 million sq ft in seven major cities, mainly due to demand from IT/ITeS, e-commerce companies and start-ups, according to property consultant JLL India. The absorption stood at 29.9 million sq ft last year.

India’s largest drugmaker Sun Pharmaceutical Industries Ltd said it had received a warning letter from the US Food and Drug Administration for violating manufacturing standards at its Halol plant in western India.

The warning indicates the agency is not satisfied with the remedial measures Sun Pharma has been taking at the plant since last September when the FDA first highlighted issues at the plant after an inspection. (Link)

U.S. health regulators are investigating complaints about laboratory and research practices at Theranos Inc. by two former employees of the blood-testing startup company, according to people familiar with the inquiries.

A complaint filed in September by a former Theranos lab employee to the Centers for Medicare and Medicaid Services alleged that management instructed lab employees to keep testing patients with the company’s blood-analysis devices despite indications of “major stability, precision and accuracy” problems with those devices. (Link)

The latest round of fundraising values the Kolhapur-headquartered bank, formerly known as the Ratnakar Bank Limited, at nearly Rs 6,500 crore. ADB has picked up 4.45% stake, making its maiden equity investment in RBL, while UK-based CDC Group, which had invested in the bank in 2014, will see its stake go up to 4.91% after the latest private placement. (Link)

#general: Stuck IPOs of Thyrocare, RBL Bank may get a relief

The Securities and Exchange Board of India (Sebi)’s recent decision to not penalise unlisted entities in breach of the public issue norms is a shot in the arm for the latter’s initial public offering (IPO) plans.

At least six companies, according to a source, were not able to proceed with their IPO plans, having breached the investor cap prescribed in the erstwhile Companies Act. Sebi at its board meeting on November 30 clarified that such companies will avoid penal action if they provide investors an option to surrender their securities. (Link)

Pricing on the iPhone 6s and iPhone 6s Plus in India has been reduced by between 11 and 16 percent, reflecting Apple’s most aggressive approach yet with a new flagship handset in the world’s second-most-populous country. (Link)

#macronomics: Average U.S. gasoline price falls below $2 for first time since 2009, but not so for L.A. area

The nationwide average for a gallon of regular gasoline fell below $2 on Monday for the first time since March 2009 — but L.A. prices are nowhere near that milestone and probably are as low as they are going to get.

While motorists nationwide are enjoying gas at $1.99, the L.A. average climbed to $2.87 and could continue rising as delays plague repairs at Exxon Mobil’s Torrance plant, which has been operating at less than 20% capacity since a February explosion. The statewide average was $2.72. (Link)

#macronomics: WTI Crude Plunges To $33 Handle Ahead of Futures Expiration

While contracts have rolled, we thought it worth noting that January WTI Crude just flushed to a $33 handle for the first time this cycle. Feb crude (the current front-month) is down almost 2% to its series lows around $35.35. 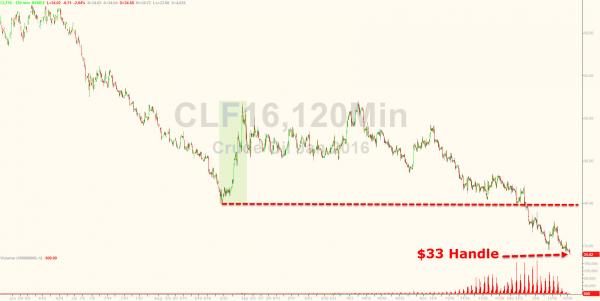 After bringing Ranbaxy into its fold last year, India’s top drug-maker by market value Sun Pharmaceutical Industries Ltd is now setting its sights to acquire local rival Intas Pharmaceuticals Ltd, and is in ‘early talks’ in what could be a Rs 15,000 crore ($2.3 billion) deal, multiple sources familiar with the development said.

Intas Pharma is among India’s top 15 pharma companies, and counts Singapore’s sovereign wealth fund Temasek as of its investors. It manufactures, markets and sells biosimilars, which are generic versions of biologic drugs. (Link)

As of September end, UTIMF managed about Rs 1.04 lakh crore worth of money in its mutual fund business alone, AMFI data showed. Of the total, about 50% is in equities while the balance is in fixed income and gold ETFs. (Link)

After reviving the iconic but struggling Royal Enfield brand in India and taking it to utter domination in the premium cruiser motorcycles segment in India, Siddhartha Lal has set his sights abroad. (Link)

#general: Trading And Investing: How You Can Improve Your Returns In 2016

While the finance ministry has reminded regulators about the FSDC resolution, by issuing a Handbook on adoption of governance enhancing and non-legislative elements of the draft Indian Financial Code, it looks like regulators are taking their time to fall in line. (Link)

Billionaire Anil Ambani’s Reliance Communications Ltd. is in talks to merge with smaller wireless carrier Aircel Ltd. in the latest sign that that deal-making in India’s telecommunications industry is heating up.

Reliance is considering the “potential combination” of its wireless operations with those of Aircel, it said in an exchange filing. Though the statement didn’t provide financial details, the company has 90 days to have exclusive talks with Aircel owners — Malaysia’s Maxis Communications Bhd and Sindya Securities & Investments Pvt Ltd. (Link)

Deutsche Bank AG has identified as much as $4 billion in suspicious transactions related to its Russian operations, in addition to $6 billion in so-called mirror trades it is examining, said several people with knowledge of the bank’s review of the matter.

That means the Frankfurt-based bank flagged as much as $10 billion in total trades that may not have been vetted for money laundering as clients moved money out of Russia. Among the previously unreported trades under scrutiny are ones that consistently went in the same direction — primarily buy orders, for example — according to people familiar with the matter. (Link)

An honest confession by Udayan Mukherjee of CNBCTV18 – Link

How To Handle A Sinking Market – Link

Learn to program in Python – Link

6 Of The Best Trading Podcasts – Link