Havells India Limited has announced last week that it would sell 80% stake in its wholly owned subsidiary Sylvania to ‘Shanghai Feilo Acoustics Company’, a Chinese listed company. The company would exit the remaining 20% stake over the next 3-5 years. The company has also decided to sell 80% stake in its Havells Exim Limited another wholly owned subsidiary, based out of Hong Kong.
The combined equity value for 100% stake for both companies is €186 million (INR 1340 crores. Havells cumulative investment value stands at INR 980 crores. Havells India Ltd would be receiving €148.8 million from this transaction.

In 2007, Havells acquired SLI Sylvania’s lighting business at a purchase price of € 227.50 million (around 1525 Cr). It was an all-cash deal and also the largest acquisition ever by an Indian Electrical Company.

Havells has been dragged down by Sylvania’s losses, but it’s also evident that the business at Havells Standalone is also stagnant, i.e. not growing much. EBIDTA margins remain low, and profit growth (even at the standalone level) has stalled. 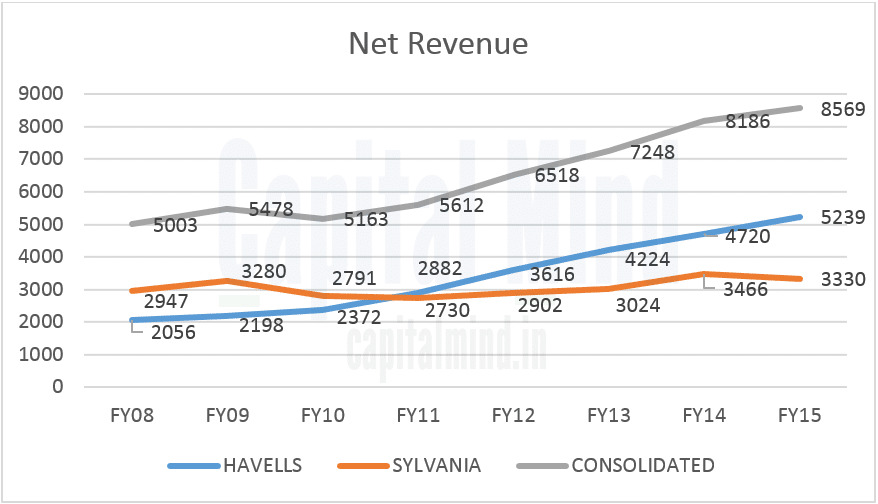 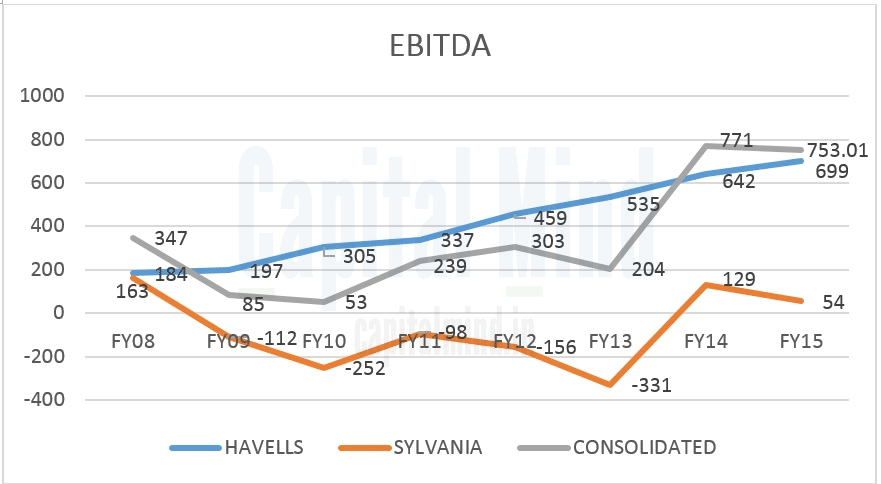 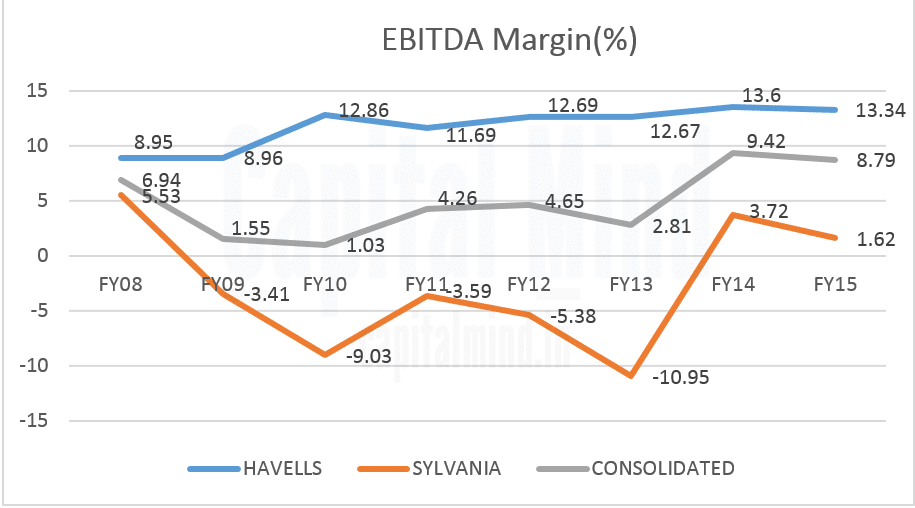 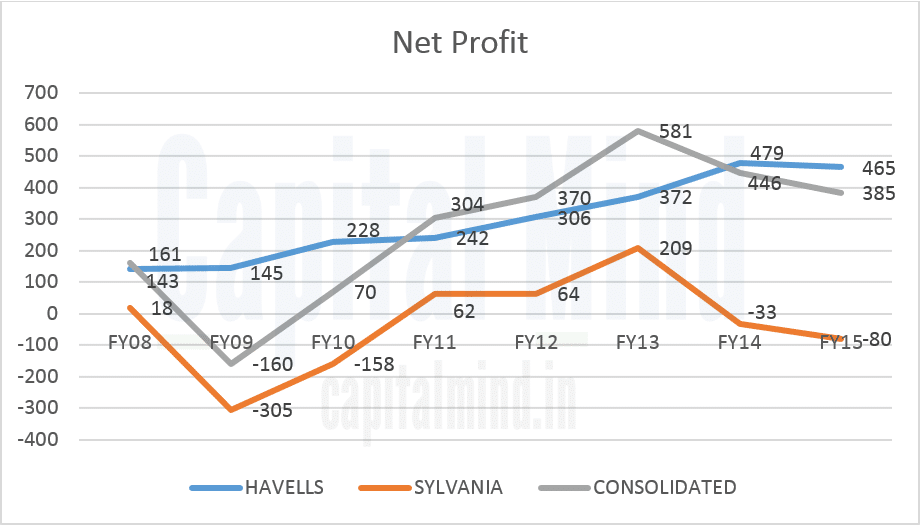 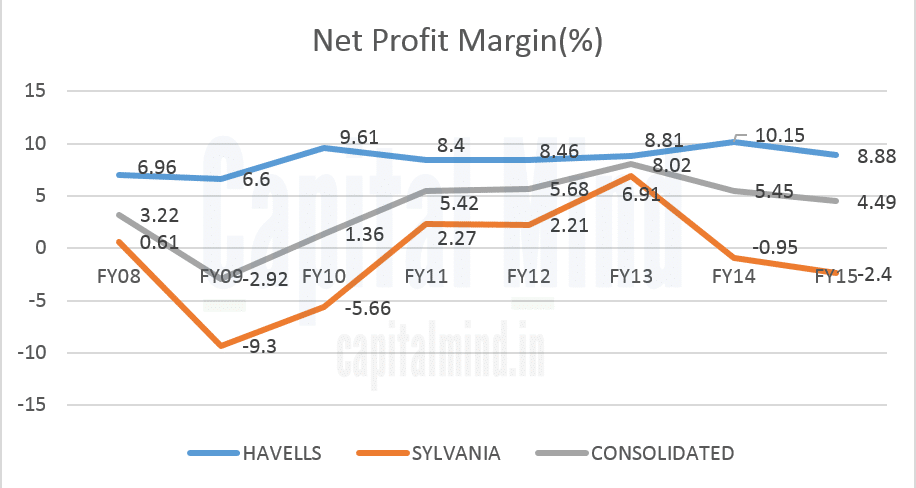 How much is the Cash Flow?

This would lead to a rise in the margins in short term and a fall in the ROE (on the account of an increase in the shareholders’ funds).

What Will They Do With The Cash?

Analysing all the available options to utilize the cash:-

1. Retiring Debt: As per the FY15 balance sheet, Havells is almost debt free. Though Sylvania has a debt of 296Cr it would be sold to ‘Shanghai Feilo Acoustics Company’ as a part of the deal. Hence no interest/debt to be paid.

2. One time Dividend: Assuming the company gives back all the profit gained (on this transaction) it would exhaust ₹ 231 Crores and would still be left with ₹ 784 Cr. The investor would be getting a dividend of less than ₹ 4 per share (after paying dividend distribution tax) or a dividend yield of around 1% at current share price of ₹ 300.

3. Stock Buy Back: This option too doesn’t seem attractive, considering the fact that the stock is trading at more than 35X Earnings. The standalone entity is currently valued at 40 times earnings and 3.6X sales.

4. Increase in Capex: During the stake sale announcement, the management has stated that they would be utilizing the cash for both organic and inorganic growth plans. But the average capex incurred by the Havells India on a standalone basis over the last 10 years is not more than ₹ 130-150 Cr per year.

Havells India top line growth has moderated in the recent past and there has been significant pressure in its domestic operations. 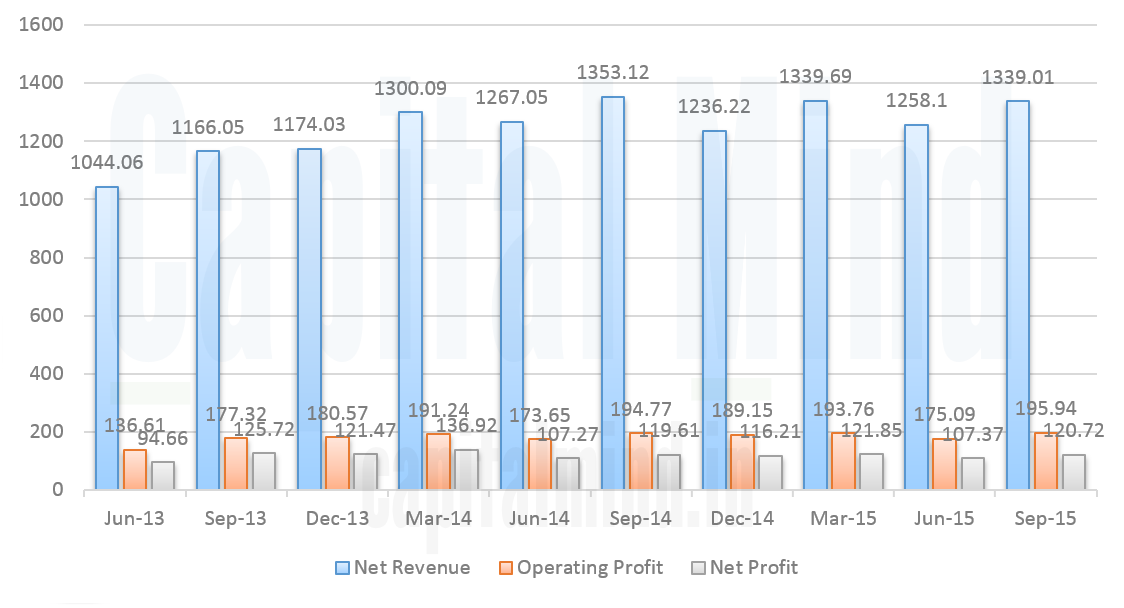 Bottom-line: Through the sale of Sylvania we expect a drop in the ROE which is currently around 20-22%. This is because of the excess cash of 231Cr getting added to the reserves which would generate an interest income of around 7-8%. There’ll also be a rise in the margins in the short term owing to the fact that the same profits or higher profits can be reported on lower sales (Sylvania is loss making but contributes more than one third of the sales). However long term sustainability of the margins would depend on the growth in the domestic operations and how well the management deploys the cash.