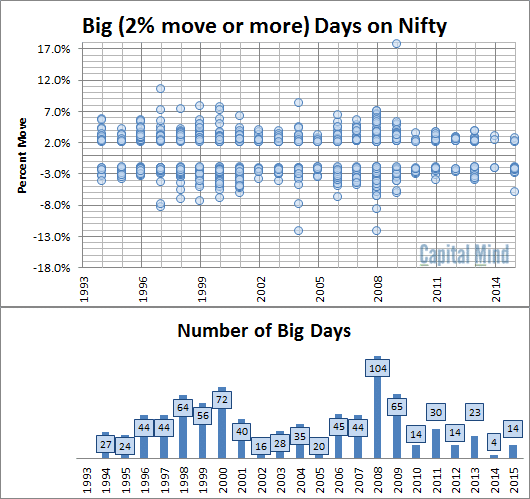 What we have been seeing is the market going steadily down or up. A 1% move is considered “big” nowadays. But it’s not really big, is it?

The Number of “Big” days on the Nifty

A 2% day – in either direction – would be big nowadays. But such days were quite common earlier; it’s just that the last five years have been benign.

This coincides with the period of worldwide QE – quantitative easing – where the world central banks flooded the markets with cheap money in order to keep them stable. Now, remember, that phase may be at an end. Expect fireworks from 2016?

Markets aren’t exactly one sided, but the big moves have, in recent times, favoured the downside much more than the upside. If you look at the downside we have seen big moves quite frequently, but on the upside, moves seem to be capped. That Rip-Your-Face rally, so common in the years gone by, are missing. 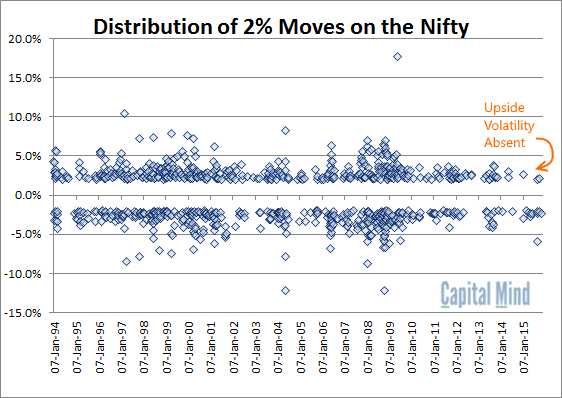 But Big Months Are Missing!

If you consider big days, that’s one thing. But have we ‘trended’? Have markets moved a large amount, say 10% in a month? Take any day, and then a month back, and see if the Index has seen a big move?

Just 3 big days this year that saw a 10% move from a month back – those were three consecutive days in September 2015. That’s it? 10% move-a-month have been ultra-common earlier – and 2015 would be the least volatile year in terms of monthly moves, since the inception of the Nifty!

When it seems so smooth, it will not be. Markets are not tame, domesticated animals. They are built to be jungles, wild and volatile. Like crude prices. Like Gold. Like, as the west found out and we will soon, housing prices. When the madness seems like it’s gone away forever, it will come back.

Stay nimble – Volatility is like a big pothole on an Indian road that has, for some reason, been paved well for the last few years. You drive faster and faster each day assuming that the good road is here to stay, but because you’ve lived long enough in India, you should really know better.