India’s Index of Industrial Production (IIP) showed a major Diwali Effect as it rose 9.8% over the previous year for October 2015.

Why? Because of Diwali and Dusshehra. The dates for these festivals are variable, and typically there are a lot of holidays around them. Factories are shut, workers take time off etc. Production is hit.

When Diwali is in November and Dussehra is in October – which is most of the years and in 2015 – things are fine. Holidays are spread across two months, and the production impact isn’t so bad.

When Diwali and Dussehra are both in October, the impact is huge – and this was the case in 2014 and 2011. And the subsequent Octobers, when the Diwali moved to November, we find a pretty big jump in IIP: 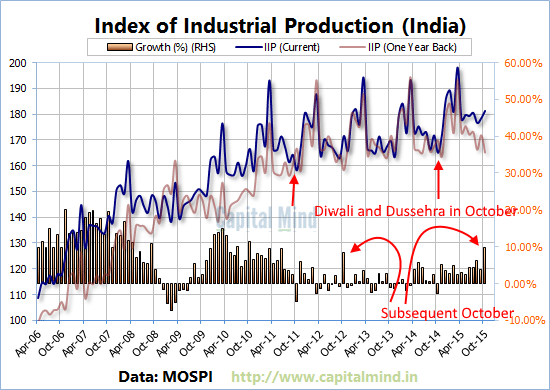 So: IIP isn’t very reliable in this month for the October data. In fact, last year I mentioned this specifically for the December data.

But to complete the charts:

Manufacturing Records An Uptick at 10%

While this data isn’t trustworthy, the fact is that we see a spike in Manufacturing data. While not that trustworthy for October, Consumer Durables recovered with a 40% year on year increase. However, do note that Consumer Durables as a segment was dead for a while, and we are simply getting out of that phase. 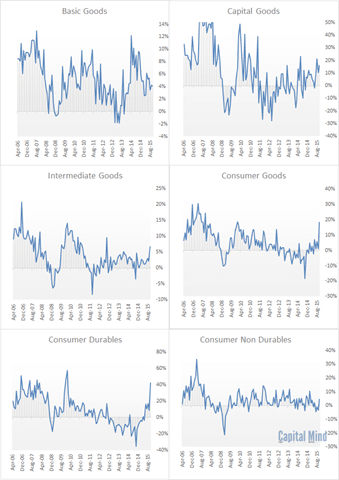 Our View: Not Reliable, But Some Hope at Least

IIP has not been very reliable as an indicator in the recent past. The 9.8% is probably something we can normalize through past data, but it sounds like too much work. Instead, we’d rather ignore this data for now. A better idea may be visible once November data is in.

This is a recovery phase for the IIP, indeed. But it’s nowhere near 9.8%, we believe, and normalized numbers should be around 5%. That’s about how much the GDP is growing at, nominally.