Consumer Price Inflation for November 2015 came in at a 1 year high of 5.41%, riding largely on the back of high food inflation. Here’s the situation in graphs: 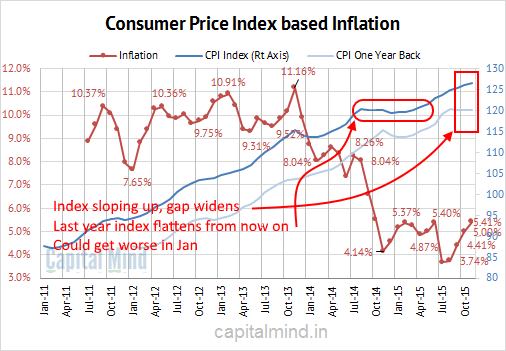 As you can see the index last year was FLAT between September 2014 and March 2015.
The current year’s index is sloping upwards.
That means if the current index slope is maintained we will easily see the gap widen between the previous year and this one. And that means: higher inflation.
At the rate we are going, 6% could just about happen next month!

With over 40% increase in the price of pulses this year,food inflation is now the highest in a year, at 6%.  But a lot of other items are going up too – Housing, transport, Education, Personal care, and Household Items.

Rural and Urban: Both Increasing in terms of Inflation

While the headline numbers are still under 6%, but inflation numbers are now moving up for both rural and urban areas. 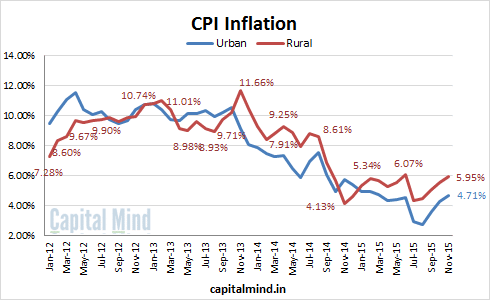 Core CPI still okay, Even if it is Rising

If you eliminated Foods and Fuel, then the CPI change will be reflecting what is ‘secondary’ inflation – since the prices of food and fuel are volatile. (Think of a restaurant menu versus the cost of onions – inflation in the former is more “permanent” than the second which is transient)
Core CPI had been under 4% recently and has inched up to 4.42%. This however is too small to be a worry. 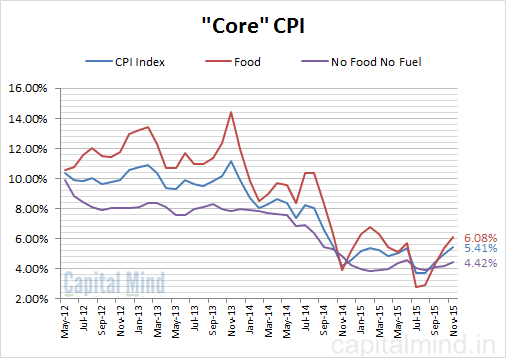 Our View: Rough But December Will Be Worse

Things aren’t good in the inflation area, since the rupee has depreciated (and it’s over Rs. 67 to a dollar today!). This will impact our costs of imports and create inflationary issues here (as we are a net importer).
Food inflation is a worry indeed, but looking at the situation it’s not such a bad deal even at 6% food inflation.
The real problem is: how much worse will December be? It’s likely to spike to 6% or more, even if prices stabilize now. That will create a headline issue – because analysts will forget about the lower base formed last year, and read into it the thing people are scared about : That RBI will not drop rates anymore.
That should already be the base case – we are unlikely to see any further rate cuts from RBI till February.
This inflation number is bad, but in the big picture, this is not significant, as we are still under the 6% limit that RBI has to keep inflation within. If there is no reason to expect another rate cut, then this number is of no significance; it will not move the needle in either direction.