Here’s Five Charts in the RBI Banking Financial Stability Report that are worth a look:

The Federal Reserve showed signs of a rate hike through a “taper” in 2013, and then, all emerging markets were hit badly. And now, when the Fed actually hiked rates, the corresponding “tantrum” has hurt everyone else a lot more – and India, a lot less. Even though our currency is hit, it’s not quite as bad as the others. Put another way – the rupee could get much weaker just to be normal. 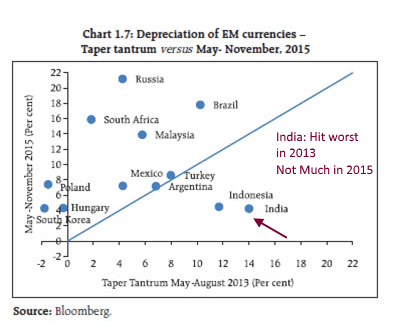 2. The Public Sector is the Problem Banker, But Quality in Private Banks Too is Deteriorating

Public sector bank stressed loans – adding NPAs and restructured loans – are at nearly 14% of their total loans. Even Private banks show an uptrend, at 4% or so. 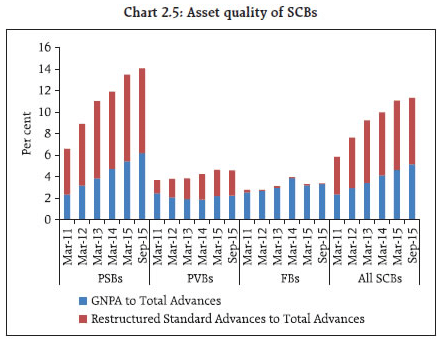 3. And Stress Is In The Most Troubled Banks

If you divide banks into buckets based on their “stressed advances” ratio – you will find that many banks who don’t do any lending (or not much lending) are doing okay. This includes tiny and foreign banks and so on.

But these banks add up to about 15% of the banking sector. The banks with the real problems – where more than 8% of their loans are “stressed” – are a systemic issue!

These banks – who have stressed loans of 8% of their total loans – now have more than half of all loans made by the banking system. That really means that if there is a sudden stress situation and defaults, you’re talking of half of the banking system in India in trouble! Many sectors are in stress – Construction, Cement, Iron and Steel, and Engineering. Of these the biggest NPAs, under severe stress conditions, will be in Engineering, apparently. And then Iron and Steel and Cement too. 5. And Ooh, Look How Big a Problem We have In: Iron and Steel!

Steel prices have crashed worldwide. And India’s put a massive 20% duty on steel imports to protect our industry. The problem? You can’t make our industry competitive by increasing the price of a basic good like steel. But the banking system doesn’t care because it has lent WAY too much to the steel sector! Get this: The Iron and Steel industry has the highest “share of debt” relative to other sectors. And they have a massive debt-to-equity ratio of more than 100%! They have a major problem in the worldwide steel price crash, and the ones that will take the hit, eventually, are the banks.

Overall, the report doesn’t say much. We were surprised about the stress in the Steel Sector in terms of its extremely large impact to banks. But we think the major damage is yet to come, and most of it will be in 2016.