We measure the Nifty as adjusted for inflation – by adjusting what Rs. 10,000 could buy, using the CPI. The chart (red line) depicts the growth of Rs. 10,000 in constant purchasing power terms – that is, adjusted for the Consumer Price Index. We take the Nifty including Dividends reinvested, which is depicted in an 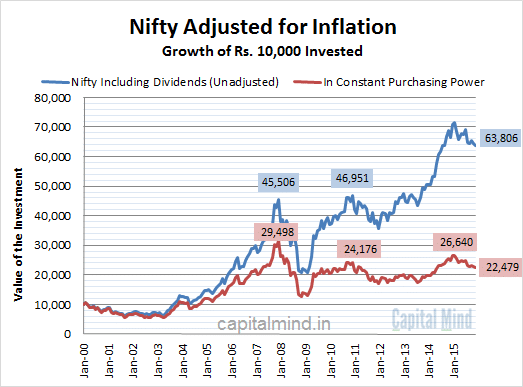 What we find is:

Note: We said in January 2015 that the Nifty was breaking through new highs, but wasn’t a high adjusted for inflation or for the P/E ratio. But hey, the P/E ratio has risen through the year, largely because Nifty company earnings have collapsed. More on that in another post!