Dishman Pharma hit a new low yesterday as they plummeted by more than 14%, the biggest single-fall since 24th August. The prime reason behind this sudden fall is because of the request made by FDA on one of it’s customers, Clovis Oncology, for more data on their awaited drug, Rociletinib, which is supposed to help treat lung cancer patients. Dishman’s Swiss subsidiary, Carbogen Amcis, was to make the API (Active Pharamaceutical Ingredient) for Clovis.

Clovis shares fell 70% in the US on Monday, and a further 11% on Tuesday. Monday’s fall must have spooked investors and took it out on Dishman.

How did Dishman Pharma take the hit because of Clovis Oncology?

While Dishman Pharma’s VP of Finance Harshil Dalal explains that they do not expect any fiscal revenue from Rociletinib in 2016 or 2017, the fall had already taken place.

Deepak Shenoy explains the entire scenario with insights in the following video. Have a look to know more. 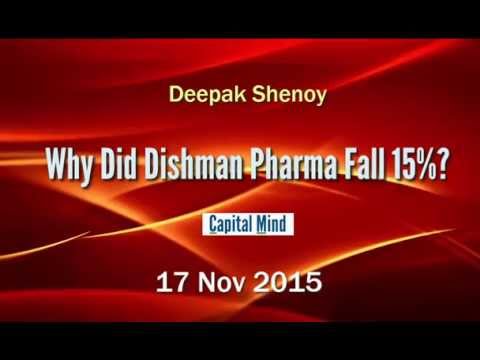 Dishman CEO JR Vyas has said (CNBC TV18 Interview) that all Clovis is expecting is a 3 month postponement of launch. Clovis could be in conversation with other suppliers of API. For Dishman, Clovis is not being factored into assumptions of revenue in the coming years. Clovis is anyhow likely to buy from multiple suppliers, not solely Dishman.

The Dishman stock is up about 5% on wednesday.