The Index of Industrial Production (IIP) for Sep 2015 hits a snag as it falls to a low 3.6% year on year growth. This is much lower than August. 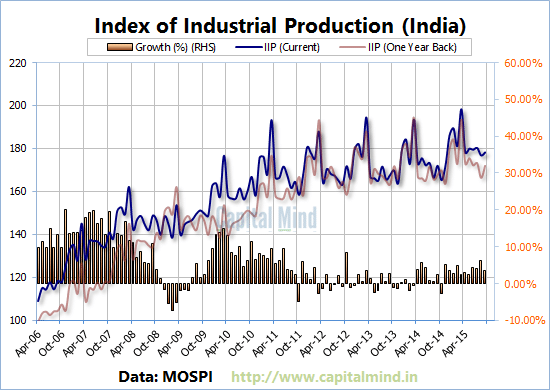 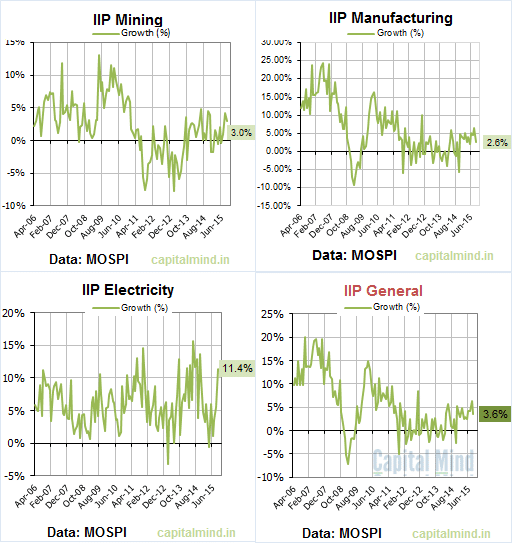 While Electricity went up a lot, mining declined to just 3%. The big disappointment though was the fall in Manufacturing IIP where we saw it plummet to 2.6%.

This is very disappointing, as we were supposed to see Manufacturing carry the India story forward.

If you look at the Use based indexes: 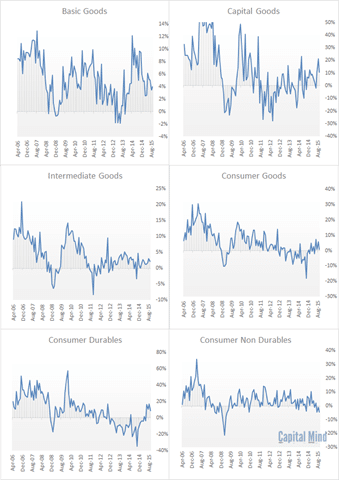 Nearly all of the indexes are looking downwards.

Was September a really bad month? It wasn’t apparent then. But IIP data is remarkably unreliable so we shouldn’t rush to make a lot of conclusions just yet. All we know is that the recent high in growth numbers was temporary, especially in the Manufacturing sector.

October’s numbers will be good. Why? Because of the Diwali effect. We explained this in a post last year.

The concept is that when Diwali is in October, it usually sees a Dussehra+Diwali in the same month. Workers take holidays and plants are shut for longer times in the month. So production suffers. Last year, in 2014, Diwali was in October. This year, it’s in November (Dussehra was in Oct). So this year, plant shutdowns will be across two months, whereas last year it will have only been in one month (October).

Therefore, October data in 2014 will be bad. So October 2015, which sees less shutdowns due to no Diwali, will see good year on year growth.

However, November 2015 data will be lousy because the 2014 equivalent didn’t have the Diwali break.

In effect, IIP is going to be volatile the next two months – high in October (released December 12) and low in November (released January 12, 2016). We expect people to forget this, of course, and report only on how the numbers look. But as a Capital Mind reader, you know.

Overall, the only way to compare things is to take Oct+Nov together. Right now though, we only have September data, and that is lousy. We’ll just have to wait to see that manufacturing revival and the Make in India movement.