Network 18 has finally realized that it’s “Senior Professional Welfare Trust” that owes it more than 550 cr. is mostly a dud borrower. After giving it that much money as a loan, the company has now had to write off Rs. 380 cr. as a provision because they are unlikely to recover money from it.

The 2015 Annual Report Takes The Hit

The trust owned about 1.6 crore shares. Now, it owns nothing. According to the 2015 annual report: 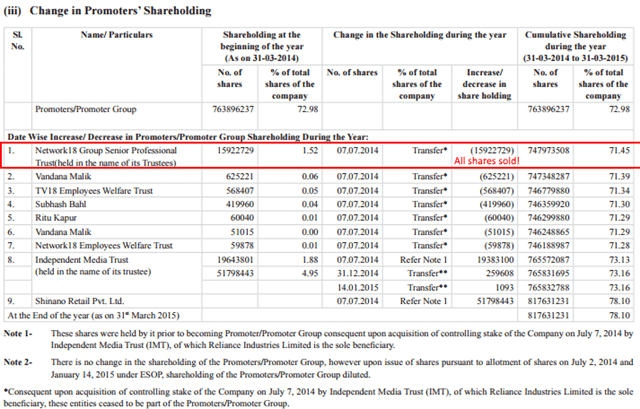 And then, they’ve decided to write off around Rs. 380 cr. of that mega loan: (Amounts in Lakhs) 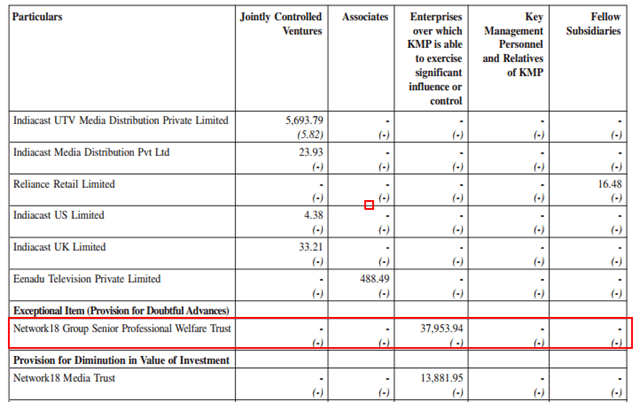 It’s still a huge loan, which still owes the company over Rs. 550 cr: (Amounts in Lakhs)

Note: You will see above how another big loss of Rs. 139 cr. has been taken for “Network18 Media Trust” which is on similar lines, but which owned TV18 shares. (A subsidiary)

The Trust Has No Shares, Will Still Owe 175 cr.

Basically the company has written off about 2/3rd of this loan. The trust still needs to pay 175 cr. (since only 380 of the 555 cr. has been written off). The trust has no shares (since it sold off the shares this year).

If it sold the shares for Rs. 70 each – the highest point of the last year – it would have got about 112 cr. Which still won’t be enough. There’s at least another 60 cr. to be “lost”, and Network18 continues to make operational losses as well.

Our View: Network18 will have to write off another large amount at a later date. The takeover by Reliance is helping clean up the book, but they aren’t yet fully clean yet. We don’t have a call on the stock – among media companies, this is a stock that should have done well, but it hasn’t and it’s likely to be because of the accounting snafus that seem to have an overhang.

This trust shenanigan, in our opinion, was a very very bad idea. They used company money to, effectively, buy the same company’s shares. The “trust” never distributed any shares to senior management, but it was in their control. It was a way for Network18 promoters to keep the share price up, and the floating stock low – and they used the money of the company (as a 500 cr. loan!) to do so. This is legal, but not really above board in our opinion. SEBI has disallowed this practice – of allowing companies to lend money to trusts which buy their shares, but the deed was done by the time SEBI had gotten into action.

Disclosure: No positions.I appear on CNBC-TV18 which is owned by Network18 but I am not compensated by them and there are no commercial deals between us.