Amtek Auto’s bonds have been held by JP Morgan AMC, now in a segregated fund. The 200 crore worth bonds are it seems, in some kind of a deal with a vulture fund, SSG Capital Management. (Source: Economic Times)

While SSG plans to directly buy out the Rs 200 crore debenture holding held by JPMorgan, Amtek intends to settle the issue of the remaining Rs 600 crore debentures with the banks and realign the debt with Amtek’s future cash flows, multiple sources close to the negotiations told ET.

But SSG wants JPMorgan AMC to offer the debentures at a decent discount as well as the Amtek management to provide additional security besides stringent payment conditions – terms that the management is yet to agree.

“The fund has put the terms before the management and they have almost agreed to the terms. The negotiations are on and are in an advance stage,” said one of the sources. “We need to have regulatory approvals, which are pending at this point in time,” said one of the sources. “Till two week ago, JP and SSG were discussing the haircut…But if SSG gets more collateral, Amtek’s existing bankers would demand more cover,” said a person familiar with the situation.

The stock itself hasn’t moved much, and continues to be in the doldrums. Every few days some enthusiasm happens and then goes thud again. 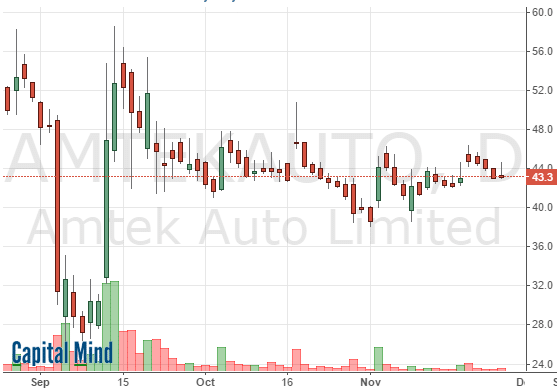 The JP Morgan move will be interesting for bond markets, since there’s a situation of default, and this is an unwinding. What kind of haircut will happen? Will other lenders agree to any extra collateral cover?

It’s already more than two months since the default. We have no idea how much longer it will take.