Investors Should Not Love EROS, says AlphaExposure in a long post that highlights key problems with the US listed company that markets Indian films.

The big issue really is that the economic model has questions that have not seen convincing counter arguments by management.  On the accounting front, there are legit questions. There are huge receivables – and receivables increased by $93 million, which was about 32% of revenue. The turnaround time to collect receivables also zoomed to 403 days, which has increased from 258 days last year. Plus, in one subsidiary, they have seen an increase in receivables that is 120% of the increase in revenue – technically this is not possible!

And then there are related party transactions. And, they seem to have excessively high compensation to insiders, and the company has been issuing stock regularly to make up for cash shortfalls. Menwhile the managing family is consistently selling shares. The accountant who audits the company is too small to do so, says the article, and he’s resigned recently from some subsidiaries. (The Indian listed entity is audited by Walker Chandiok & Co which is not really small)

Additionally, much of the revenue has been moved to Dubai. Why? The management says it’s because of tax freedom, and that sales are all happening there. This is strange though – but if you considered that the Indian underworld seems to operate from Dubai, and they control much of the strings in terms of movie rights, it might make sense. But you can’t really explain that on a conference call, because the next question would be: what’s the underworld stake in this? And that’s an area you won’t even want to go to.

Wells Fargo first questioned the numbers, including download counts of their application. 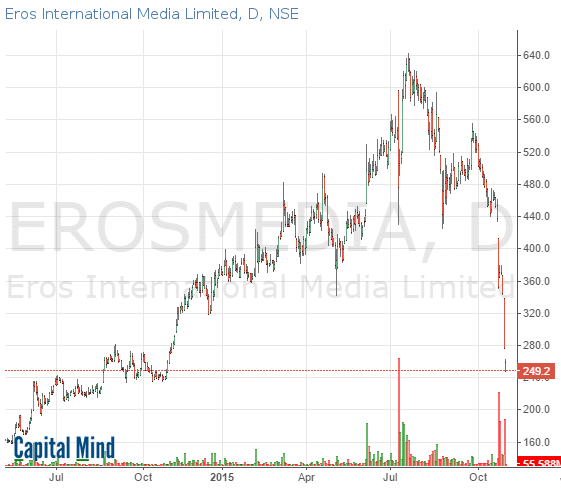 This is just the Indian subsidiary, the US company has lost a heck of a lot as well.

Our View: There is not enough management commentary to offset issues noted above. While many of the questions are valid, it is also likely to be over exaggerated by short sellers, who are placing their point of view online. However, short sellers often tell the bitter truth, because each and every assertion has to be backed with solid data. And at this point, the data is winning – Eros seems to have exaggerated its claims and the issue of very high receivables is a concern.

Their India subsidiary will have results on November 9. They have a pretty big hit in the form of Bajrangi Bhaijaan, so the numbers will be looked at closely. If there isn’t much done in terms of addressing concerns this stock’s not worth the effort – and if it’s US promoter (listed in the US) tanks more, this stock will continue to get impacted. We wouldn’t be a buyer at this point.