Eros Plc is down 31% in the US on the day of Diwali. And largely because of concerns about reported numbers. The stock has tanked substantially, here’s an hourly chart: 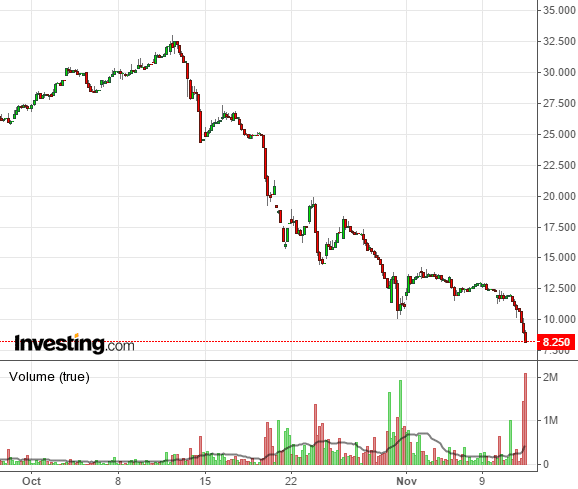 Earlier in October, the stock had tanked due to accounting questions, raised by a number of people including short sellers. The blog alphaexposure had serious details (and is written by a short  seller, so you should assume bias) about how the company was likely to be misrepresenting revenue and a lot of other things.

On November 10, alphaexposure wrote a new entry, called “Return of the Short Seller” saying that:

Apparently, this became a question in a Wells Fargo organized Conference yesterday, and the CFO didn’t behave very well. He apparently has not released a list of movies they distributed. Note that the following twitter ids may not be unbiased – they are likely to have short positions. (This is unverified – we cannot find any independent source to confirm what happened)

No matter  how bad the situation is, you can’t go overboard  in a conference. But that apart, managment needs to quickly inform everyone with a comprehensive list of all the movies they distributed in the two years – can’t be very difficult to prove the short sellers wrong!

The bonds are crashing too!

Eros has bonds listed on the London Stock Exchange which fell from near 99 cents to about 31 cents to the dollar.  (Source) 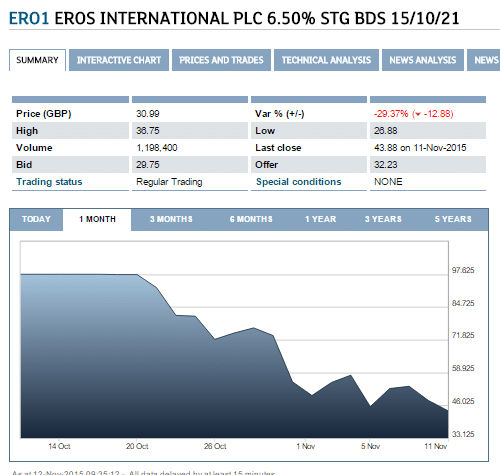 The Indian Results Were Fantastic, but…

Eros India – the listed entity here – announced results on Monday and had great numbers. Profits have nearly doubled and so on. But in the face of these allegations, some part are troublesome: that their Indian Auditor – Walker Chandiok – has said that they haven’t audited the accounts of the subsidiaries of Eros India – and more than 55% of the last six months profit are from those subsidiaries!

Here are the numbers, including the “not-Walker-Chandiok Audited” subsidiary numbers, and the proportion they have in profits:

While this is normal practice, in the context of numbers being suspect it does scare you that most of their profits come from a source not audited by the primary auditor.

We are not long this stock. We are not short this stock. The way things are going, you could call it a “malicious” short seller issue, which would not be right – because the questions raised are valid, and the company needs to come out with clear answers. For instance, releasing a list of every single movie they distributed in FY14 and FY15 would be useful to refute these allegations. That should be fairly easy if they have the numbers. And if they don’t, well, we’ll have to believe they don’t have it because the numbers were truly fictitious.

We wouldn’t buy this stock, and believe the Indian stock will fall as well, when the market opens tomorrow. However, there’s a good 15 hours before that and Eros management might clarify well in time. While they had a great quarter with Bajrangi Bhaijaan, and possibly a good one coming with Bajirao Mastani in December, the company is not having a very good Diwali.