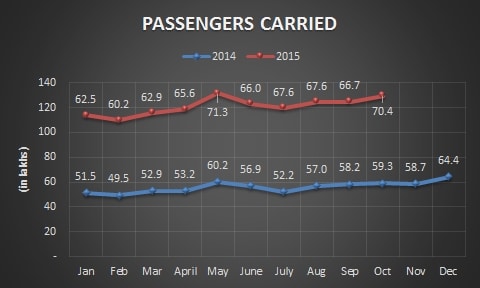 We bring to you the “Domestic Airlines Report Card” for the month of October, 2015. We take a look at the Number of Passengers carried, Market Share of Each Carrier, Passenger Load Factor and others.

The total number of passenger carried during the month of October, 2015 stood at 70.39 lakhs compared to 59.25 lakhs during the same month of the previous year.. This resulted in a growth of +18.8% (YoY).

Indigo Airlines  – the market leader with +36.8% market share, carried 24.30 lakh passengers compared to 18.9 lakh passengers during the same month of the previous year, resulting in a growth of +37%.

(Note however that the numbers for Air Asia etc. are small, since they have minuscule marketshare, so the growth is on a smaller base. ) 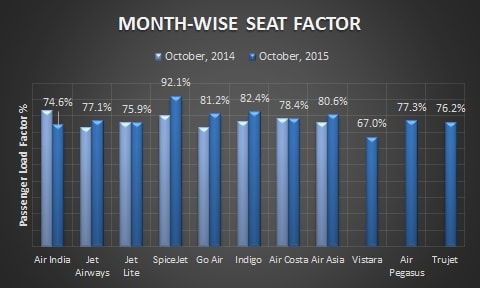 The overall cancellation rate of scheduled domestic airlines for the month of October 2015 has been 0.57%.