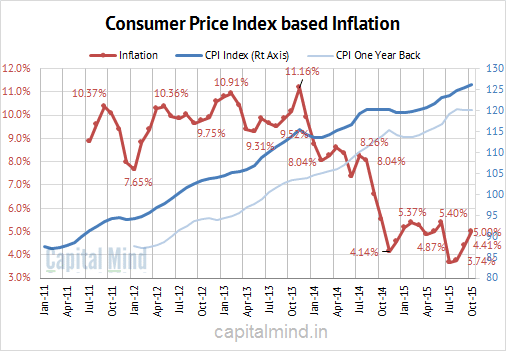 Consumer Price Inflation came in at 5% for October, the highest in four months. A good reason was the base effect – last year, the index had tapered off and the difference shows in the higher inflation numbers.

What we should really worry about is that if the slope of the inflation curve continues as is, we will easily see 7% inflation.

While it’s not a major source of worry just yet, here’s how the Inflation numbers stack up on a component wise look – it seems like food is going back up, as are fuel costs, personal care, and even transport. Fuel costs are up largely due to higher taxes. 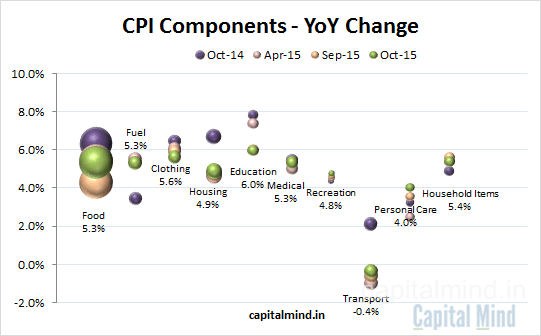 In the countryside there’s a much higher concentration of food prices in the commodity basket used, so a spike in food prices means higher inflation for the villagers. And that’s what’s happening: 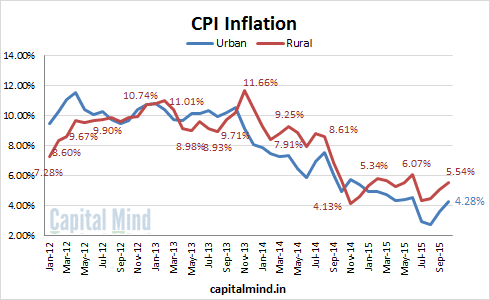 And Finally, Core Inflation Is Moving Up Too

If you consider that food and fuel are transitory elements, the rest of the system becomes “core” – in that inflation in that area is more dangerous. While inflation isn’t too bad right now, this element is also starting to move up. 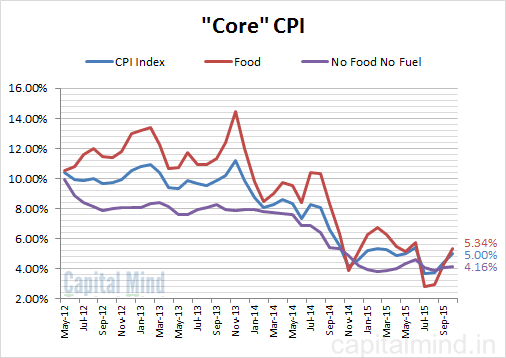 Our view: At 5% inflation is within the RBI parameters. The fear is that it will continue to rise from here, and with the rupee depreciating, it’s quite likely that future inflation will be high. The common man is currently astounded by the 180 rupees he has to pay for daal or the Rs. 50+ that onions still seem to cost. The refusal of the government to allow lower crude prices to trickle down, means that we aren’t really benefiting that much from lower prices. In the end inflation is a menace we have to wipe out, and allowing lower prices – despite protests by those that apparently can’t match them – is a good idea.