Indian trade falls for yet another month as things look really bleak. The Trade Deficit was very low and that’s the good news: 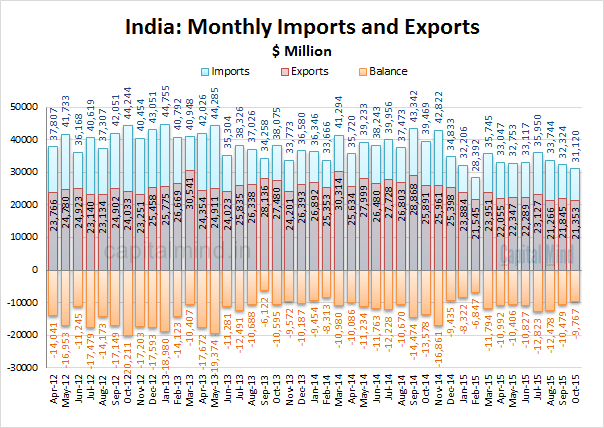 But the problem, as you can see is that both our exports and imports are near multi year lows!

Growth has fallen off a cliff, really: While import growth slowdown is because of lower crude prices, it’s also that non-oil imports are falling. Non oil imports are now about 10% lower than the previous year. Much of this is also become commodity prices are much lower than earlier. It’s sometimes not useful to just see the monthly figures – since some months have 30 days and others have 31 etc. If you divide the total volumes by the number of days in the month to get an average daily trade volume (Exports+Imports), we can see how trade itself has moved for the country: The number is actually the lowest since 2011. And it’s fallen nearly 20% year on year.

From here, statistics should improve, at least on year-on-year growth numbers, as the slide happened last year. But real growth won’t be easy; we do need either the world to recover (for our exports) or India to recover (which will reflect in higher imports).