The NSE’s Nifty has 50 companies. That index is the top 50 companies in India by market-capitalization (technically, free-float market cap, meaning shares that aren’t owned by the promoters)

If you add up the revenues and profits of these companies, and you compare the aggregate numbers with the aggregates of the previous year (of the same companies), you see how the performance is of the Index as a whole. Given that revenues and profits tend to be skewed towards the bigger producers, this does skew the index towards the biggies – for instance, an ACC has a quarterly profit of just Rs. 100 cr. or so, while TCS has a quarterly profit of over Rs. 6,000 cr.

However, the aggregate numbers will usually smooth out any smaller issues, and is a useful way to look at the index as a whole.

The problem? Well, we’ve had three lousy quarters now, of falling profits, and of falling revenues. 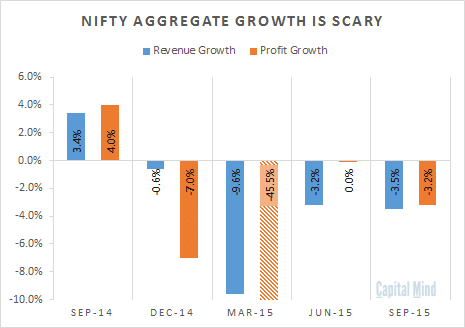 (Note:  the March 2015 quarter had -45% profit change, which has been appropriately chopped in order to show the other quarters better).

We saw horrible quarters in March 2015, and in June, though the June quarter started badly and eventually closed flat in terms of profits.

(For Premium members: We posted the Chilling March Numbers with complete details)

Meanwhile, we have been seeing incredibly high Price to Earnings Ratios for the Nifty. In fact we noted in early October (Premium: Nifty and CNX 500 P/E beyond 22) that earnings growth was deeply negative, while Nifty P/E was 22+.

Even now, it’s nearly 21, even after the index has fallen about 6% in November.

Our View: Fundamentally, we should be at much lower levels for this kind of earnings growth. Markets are attempting to discount future growth (but honestly they have no clue, no one thought earnings growth would be negative in 2015 when you think about a year or two back). But at some point when reality catches up, the P/Es should fall appropriately.

But don’t attempt to short markets on this data – markets run more in the short term on volatility driven by expectations and capital flows rather than by pure fundamentals. At the same time, we would take note that the markets remain frothy even after this fall.