TCS released their results late Tuesday evening. (Here are the transcript of the call as well as the original video.) We present them in charts: 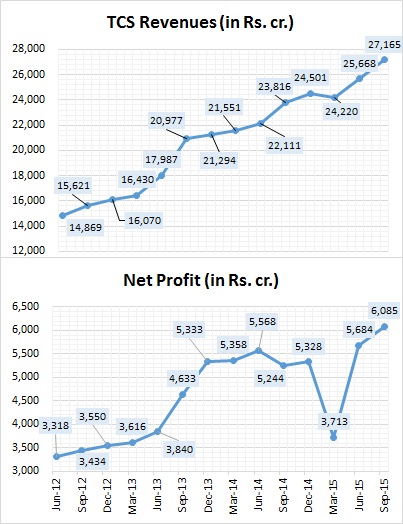 Revenues have been constantly increasing as has Net Income. Operating margins too have been consistently hovering around the 27% mark. The blip seen in Net Income was due to the special employee rewards that TCS had announced in Q4 2015.

So far so good. 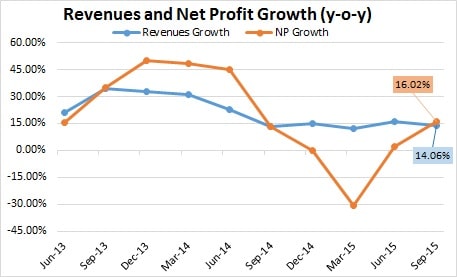 The y-on-y growth in Revenues and Net Income has been quite positive too (apart from that outlier).

So why did they drop 4% right after they announced their results?!

During the Earnings presentation, their CEO N. Chandrasekaran, emphasized quite strongly on looking at the growth figures in constant currency terms, as opposed to Dollar or Rupee terms. This might make sense, considering the massive depreciation seen in a lot of emerging market currencies, especially Latin America which accounts for nearly 2% of their revenues this year.

He also stressed on 3 issues that were plaguing TCS entering into the Q2 quarter. Those were:

Latin America has been resolved he says. But still, this geography accounts only for a shade under 2% of Total Revenues (less than what the MEA region contributes btw).

Compare this to Japan, part of Asia Pacific (APac) that on a whole contributes 9.4%, and the UK division (of which Diligenta is a part), having a share of 16.1% in the total Revenue pie. He has ominously warned that these 2 regions will face serious pressures for a few more quarters into the future. This could be one of the main reasons why investors got spooked and ended up bringing down the share price a couple of notches.

This could point to the inherent issues in those Japanese and Diligenta businesses that Chandrasekaran was alluding to in the conference. These growth rates are on a year-on-year basis for each quarter. Since it accounts for the cyclical aspects of the business, comparisons with other quarters are meaningful.

Employee attrition and retention has been a recurring problem for TCS since late last year, circa December 2014 when mysterious news kept popping up of TCS planning to lay off workers en masse. Of course, TCS went all out to deny it, but it did not hide the fact that attrition was really high at the company.

We had written a few posts on this development. You can find them here:

Is The TCS Bonus a Way To Show Their Severance Payouts? Slowest Headcount Growth in a While, Stock Falls 4% on Falling Revenue Growth

Is Firing People with 3 Months Severance Pay Unfair? I don’t think so.

The special employee bonus that was issued in Q4 FY15 did not do much to quell this behavior. We have listed the attrition rates below: 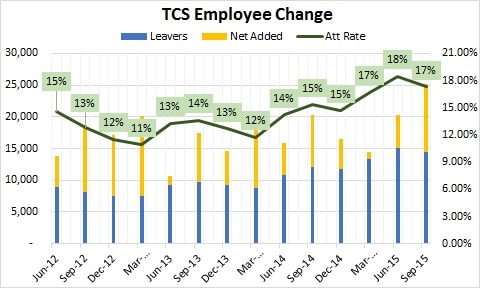 For attrition rate, in order to provide some more clarity we have used our own calculation, which would result in a slightly different number from what TCS has announced.

Attrition Rate = [No: of Leavers/Total Headcount at the end of the quarter].

We then annualize it for the whole year (X4).

The method TCS uses to arrive at their figure (which is 16.2% for the quarter) is different, probably a weighted average of attrition rates across different geographies, but nevertheless comparisons are still valid.

The point being that attrition has been quite a significant problem for TCS, as with the other major IT players. However, a look at the stats reveal that average attrition has steadily increased from FY 13 to FY 15 (from 12.44% to 17.89%), and for the 2 months of FY 16, the average attrition rate is significantly higher than that of the previous years. This could pose an immediate concern, as the record hiring levels that TCS has seen in Q2, could be to mask the record no: of leavers.

Going forward, these problem areas could potentially put some downward pressure on the stock price. However, there are a few important things to take away from the Earnings conference call: